Igor Bobkov was the star for Admiral as the Vladivostok team got a 2-0 win at Metallurg. The goalie pulled off 32 saves for a shut-out against one of the most potent offenses in the competition, helping his team to a shock success.

There was little to choose between the teams in a scoreless opening session, but after the intermission the pattern of play began to change. Admiral started creating the bulk of the chances – despite killing a 5-on-3 penalty – and got its reward in the 35th minute when Yegor Yakovlev opened the scoring.

Bobkov showed his worth in the third period as Admiral defended its advantage. Whether it was reaction stops from a deflected shot or standing tall in the face of a Jan Kovar breakaway, the keeper was unbeatable. And as the clock ran down Niklas Bergfors made the outcome certain with an empty net goal. 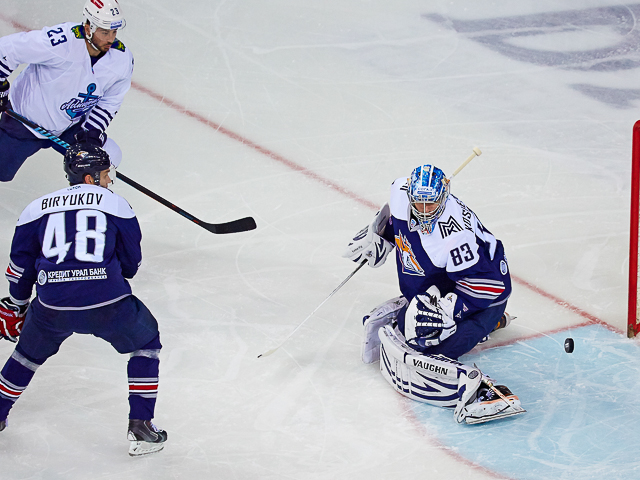 Salavat Yulaev’s recent revival came to an abrupt halt at home to struggling Amur. After winning five games in a row it seemed that another success was on the way when the host went 1-0 up after 100 seconds through Andreas Engqvist.

But Mikhail Zheleznov tied the scores six minutes later, and Amur went from strength to strength thereafter. Tomas Zogorna put the visitor ahead midway through the second period and in the closing stages Salavat pushed for an equalizer only to lose out on the counter attack. Vyacheslav Litovchenko and an empty-netter from Vladislav Ushenin completed the scoring; visiting goalie Juha Metsola had 31 saves.

Avangard back to winning ways

Avangard bounced back from Sunday’s surprise defeat in Khanty-Mansisyk with a dominant display in Kazakhstan.

The first period was one-sided: Avangard outshot the host 14-3 but only had Alexander Chernikov’s goal to show for that effort. With Barys competing more fiercely in the second, there were fears that such profligacy would come back to harm the visitor when Roman Savchenko’s power play marker tied the scores at the midway point.

However the ever-reliable scoring of Sergei Shirokov and Alexander Perezhogin continues. The duo scored within five minutes of each other to set Avangard on the way to victory and Yury Petrov made sure in the third period.

Spartak comes from behind to win

Spartak continued its climb away from the foot of the table with a third victory on the spin – but after comfortable road wins in Central Europe, Tuesday night’s game was a hard-fought affair in Moscow.

Severstal, rooted to the foot of the conference table, had cause to hope for better things against a fellow-struggler after some encouraging recent shows and the visitor took the lead in the 34th minute through Andrei Shefer.

But Spartak rallied to turn the game around either side of the intermission. Vyacheslav Leshchenko got the vital equalizer six seconds before the break, and 10 seconds into the final session Maxim Potapov made it 2-1. Severstal struggled to get shots on the net in the closing stages as Spartak held on. 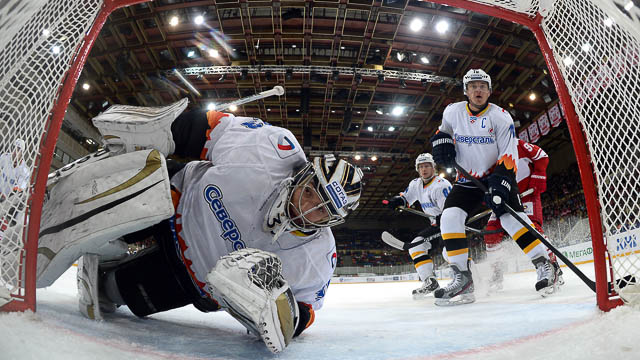