And most of the 10,000+ fans went home happy after Martins Karsums completed a big fight back to give the home team victory after trailing 2-0.

Karsums’ game winner came seconds into the third period on the power play. Alexei Tsvetkov found Maxim Karpov on the slot, and while his close range attempt was blocked the puck dropped perfectly for Karsums to fire into a wide open net.

Earlier, though, SKA seemed to be on course to avenge last week’s 4-2 defeat in Petersburg. The visitor took the lead in the last second of the opening stanza when Anton Burdasov fired home off a Vadim Shipachyov pass. That advantage doubled in the 26th minute when Yegor Yakovlev smashed the puck into the top corner.

But Dynamo stepped up the tempo in response, and a two-minute spell late in the second period changed the direction of the game. First Maxim Pestushko intercepted a slack pass from Ilya Kovalchuk and beat Mikko Koskinen in a one-on-one. Then Dynamo’s special team combined, with Tsvetkov and Karsums creating the chance for Mat Robinson to launch a howitzer from the blue and beat the well-screened goalie. That tied the scores and paved the way for Karsums’ game-winner. 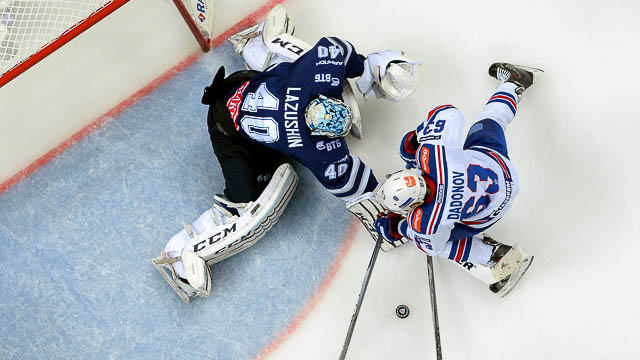 In-form Radek Smolenak followed up a hat-trick in his last game with another goal as Medvescak won 3-1 at home to Vityaz. He got his team’s third in the 55th minute to secure a hard-fought victory. Earlier Jesse Saarinen gave the host an early lead before Roman Horak tied it up early in the third. Geoffrey Kinrade reinstated Medvescak’s advantage on 44:59.

Rok Ticar struck late in overtime to give Slovan a 3-2 win over Dinamo Riga. In regulation the teams traded four goals: Lauris Darzins put Dinamo in front in the 35th minute but Milan Bartovic and Lukas Kaspar turned it around early in the third. Mikelis Redlihs tied it up with seven minutes to play.