Top faced bottom in Togliatti and the result went according to the form book. CSKA was shocked by an early Anton Shenfeld goal after just 22 seconds, but recovered quickly to tie the scores through Dmitry Kugryshev.

Maxim Mamin’s close-range finish put the Army Men up late in the first period, and from that point on there was only one winner. Denis Denisov added a power play goal in the 21st minute to stretch the lead as CSKA tightened the screws, and Alexander Bumagin’s score for Lada could only delay the inevitable.

It remained a one-goal game until deep into the third, but Lada was unable to build up the intense pressure it needed on Victor Fasth’s net. And, when the time came to go for broke and withdraw Edgars Maskalskis, CSKA delivered the sucker punch when Geoff Platt found the empty net to seal the win. 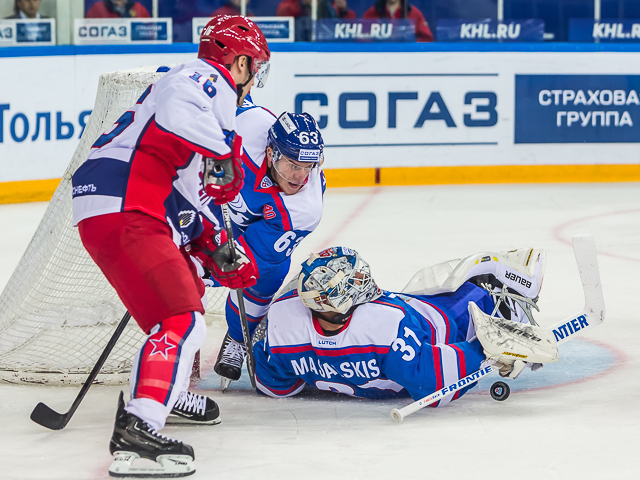 Table-topping Avangard encountered an inspired goalie as Georgy Gelashvili pulled off 35 saves to blank the KHL’s second-highest scorers this season.

Pre-game expectations suggested that Avangard would retain its grip on the top of the Eastern Conference thanks to its powerful offense, but despite getting plenty of looks at Gelashvili’s net the likes of Sergei Shirokov and Alexander Perezhogin could not find a way to solve the goalie. Perhaps the absence of leading scorer Vladimir Sobotka hampered Avangard’s prospects, but it was still a fine performance between the piping.

At the other end Ugra created fewer openings, but converted the ones that mattered. Goals in each period from Alexander Ugolnikov, Konstantin Panov and Grigory Zheldakov settled the outcome as Ugra climbs to fifth in the east.

Salavat Yulaev’s revival is picking up pace, and the visit of high-flying Sibir saw Alexei Yemelin’s men pick up a fifth consecutive victory after losing five of the first six games this season.

It was a narrow verdict, edging the Siberians 2-1 thanks to a second-period fightback. The visitor was first to show with a power play goal from Sergei Shumakov in the opening session, but Salavat rallied to find two quick goals late in the second.

First Anton Lazarev tied the scores in the 36th minute, firing home a one-timer off Artyom Chernov’s pass. Then Linus Omark got the game-winner 90 seconds later, racing onto Teemu Hartikainen’s pass and finishing the move with a precise shot to the top corner.

The final scoreline was comfortable for the home team, but it took time to subdue the namesakes from Novokuznetsk in an absorbing game in Magnitogorsk.

Until Chris Lee scored late in the second period to open up a 4-2 lead, Kuznya was fully in this game. There was an explosive start: Denis Platonov put Magnitka up on 36 seconds, but Alexander Komaristy tied the scores on 2:25. The visitor even got its nose in front early in the second period through Ryan Stoa, but Vladislav Kaletnik’s first of the game quickly cancelled that one out.

Penalty trouble harmed Novokuznetsk prospects and a power play goal from Tomas Filippi put Magnitka ahead once again. Lee settled nerves and a second goal from Kaletnik completed the scoring.

Stanislav Chistov’s shoot-out winner gave Traktor the points at home to Amur. The visitor went in front midway through the middle session thanks to Mikhail Zheleznov but Alexei Petrov tied the game with 10 minutes to play. 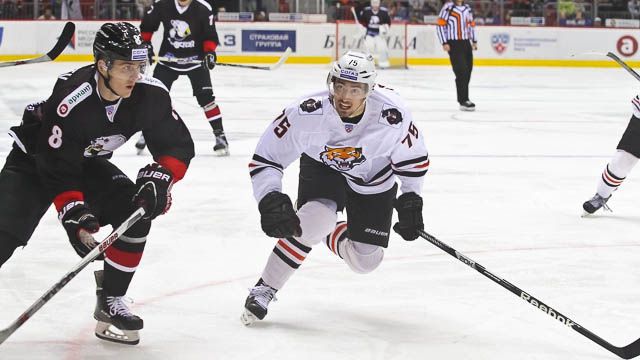 Avtomobilist edged past Barys in a shoot-out thanks to Petr Koukal’s goal. In regulation the teams tied 1-1 in Yekaterinburg, with Konstantin Pushkaryov giving Barys the lead in the 17th minute before Alexander Pankov levelled early in the second.

Ak Bars took time to break down struggling Severstal and claim a 3-1 home win. Head coach Zinetula Bilyaletdinov admitted it was tough for his team to return to the heights of Friday’s dramatic 6-3 win over CSKA, despite an early goal from Mattias Sjogren giving the host the lead. Dmitry Kagarlitsky cancelled out that strike midway through the second period, but ultimately Ak Bars prevailed thanks to Artyom Mikheyev and Justin Azevedo.

Mikhail Anisin and Max Warn combined to lead HC Sochi to a 4-1 home win over Dinamo Minsk. Anisin got the game winner off a Warn assist, then returned the favor as his team-mate completed the scoring. Igor Ignatushin and Pyotr Schastlivy also scored for Sochi, Matt Ellison got Dinamo’s only goal.

Lokomotiv beat Torpedo 3-1 thanks to a pair of third-period goals from Emil Galimov. His double settled the game after Yegor Averin and Ilya Kolganov traded markers in the opening stanza.

Two goals for Dmitry Lugin led Admiral to a 3-2 win at Neftekhimik. He opened up a 3-1 lead after Maxim Mamin had cancelled out Igor Polygalov’s opener. Yegor Milovzorov got a late consolation for Neftekhimik.