SKA was pushed all the way before edging a narrow win at Medvescak in a high-scoring clash in Zagreb.

An Anton Belov power play goal in the 53rd minute finally settled the issue – but the home team will take heart from the way it recovered from its drubbing against Spartak last time out. His one-timer from the left-hand face-off spot snapped a 3-3 tie and completed SKA’s recovery after it trailed 2-3 at the second intermission.

But Belov’s winner was rough justice on Radek Smolenak, who fired a hat-trick for Medvescak. In the first period he cancelled out Joakim Lindstrom’s opener, then he scored twice in the second to give the host the lead. Vadim Shipachyov tied the scores early in the third before Belov won it for the defending champion.

Vityaz picked up another good result with a shoot-out success at Jokerit. The perennial underdog of the Western Conference has made a strong start this season and once again underlined its competitive credentials in Finland.

Pekka Jormakka opened the scoring with  a seventh-minute power play effort as the host dominated the early stages, but Harri Sateri was in inspired form between the piping to keep Jokerit at bay. Then Vityaz forced an equalizer on the power play late in the middle session, with Mario Kempe getting the vital goal.

Sateri remained implacable: in regulation he had 44 saves, and the Finnish goalie stopped two more attempts in overtime before saving all three Jokerit penalties in the shoot-out. That gave Alexander Kucheryavenko the chance to snatch victory for Vityaz and lift the Moscow Region team to fourth in the Western Conference. 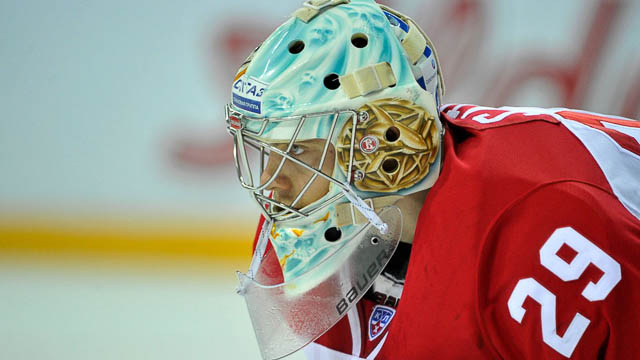 Another European scalp for Spartak

Spartak made it two big wins in a row with a 5-2 success at Slovan. Gleb Klimenko opened the scoring in the first minute but things really kicked off in the third period. Igor Levitsky and Charles Genoway (2) stretched Spartak’s lead; Tomas Surovy and Ladislav Nagy kept Slovan interested before Lukas Radil completed the scoring.