A moment of quality in front of the net settled an often frustrating encounter between Jokerit and Dynamo Moscow. Mathis Olimb’s third goal of the season was enough to hand the Finns a 2-1 victory in a game that was long on effort but often short on real skill.

However, Olimb’s composed finish from close range after Topi Jakola’s pass sliced open Dynamo’s defense was a goal worthy of clinching the three point and lifting Jokerit back to the summit of the Western Conference.

The Norwegian doubled his team’s lead after Peter Regin struck on the power play early in the middle session to break the deadlock. Dynamo’s offense struggled to get going throughout the night, but Maxim Pestushko managed to pull one back in the last 10 minutes.

The win takes Jokerit to the top of the regular championship standings with 8 regulation time wins in nine games.

SKA picked up its first overtime win of the season on a Evgeny Ketov goal in Bratislava. The forward snapped a 1-1 tie with less than a minute to play, collecting Pyotr Khokhryakov’s pass and lifting the puck upstairs past Mike Garnett to settle the outcome.

Jarno Koskiranta gave SKA an early lead, collecting Alexander Barabanov’s neat pass to the slot and deceiving Garnett in a one-on-one before beating him through the five-hole. Subsequent chances were at a premium though, and it wasn’t until deep into the third period that fans saw another goal.

That effort, however, was a somewhat freakish marker: Cam Barker thumped in a shot from the blue line, firing the puck wide of Ilya Ezhov’s net only to see the disk bounce off the boards and go in off the back of the goalie.

Struggling Spartak finally clicked into form with an emphatic win at Medvescak. After going behind early on to a Patrick Bjorkstrand goal the Red-and-Whites tied it up late in the first through Artyom Voronin. But it was the second period that settled the outcome: Evgeny Bodrov converted a penalty shot, then Lukas Radil scored on the power play before Matthew Gilroy made it 4-1. Bodrov and Gilroy doubled their personal tallies in the third before Igor Radulov made the final score 7-1. 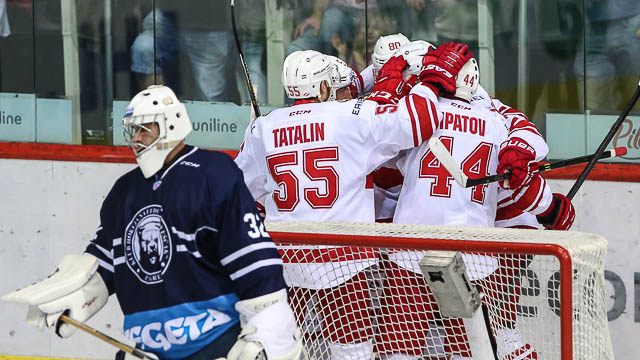 Vityaz maintained its bright start to the season with a 4-1 win at Dinamo Riga, keeping the Podolsk team in fourth place in the Western Conference. In Latvia, Vityaz took the lead early in the second period through Alexei Makeyev but lost the services of Dmitry Tsyganov shortly afterwards. Dinamo tied it up thanks to Tim Sestito’s power play goal but the visitor hit back strongly with Nikita Vyglazov and Maxim Afinogenov making it 3-1 at the second intermission. Olli Palola completed the scoring in the third.