Former Avangard goalie Konstantin Barulin had an unhappy return to his old stamping ground. The Russian international started Monday’s game for Sochi but was powerless to prevent the home team securing a decisive early advantage.

Table-topping Avangard scored two goals in 61 seconds early in the opening session, chasing Barulin from the game. Anton Kuryanov and Sergei Shirokov were the scorers as the home team took control right away.

Artyom Artemyev, Barulin’s replacement, didn’t fare all that much better: Vladimir Sobotka stretched the lead to 3-0 before the end of the first period before Pavel Valentenko and Alexander Perezhogin piled on the misery for the visitor. Ilya Krikunov got one back, but this was very much Avangard’s game.

Jokerit returned to the top of the Western Conference thanks to a trio of power play goals in the second period.

Amur made a perfect start to the game, taking the lead through Dmitry Tarasov after just 47 seconds. Vladislav Ushenin doubled that lead before the first interval and it seemed that everything was going right for the home team.

But then penalty trouble intervened – along with another big contribution from Brandon Kozun. The Canadian, named as the best forward of last week’s play, got his team on the scoreboard with a power play goal 45 seconds into the middle session. Then he turned provider, assisting on two further power play markers from Peter Regin as the Finnish team dominated the play to turn the game around.

The final period was scoreless: Jokerit’s ever-reliable defense keeping Amur at arm’s length to secure the win and go back ahead of CSKA in the West.

Sibir left it late to salvage its game in Chelyabinsk, breaking home hearts with a last-minute equalizer.

Damir Zhafyarov got the goal with just 26 seconds left on the clock, putting away the rebound from Dmitry Monya’s shot as Sibir pushed to tie the scores. Then in overtime Stepan Sannikov won the game for the visitor, moving the Siberians level on points with Metallurg Magnitogorsk in second place in the East.

Earlier Deron Quint put Traktor up in the second period but despite 41 saves from Vasily Demchenko in regulation the home team could not hold on for victory.

Dinamo Minsk won 4-1 at Spartak as the returning Red-and-Whites continued their slow start to the campaign. Matt Ellison opened the scoring in the 15th minute but the real damage was done in the middle session. Unanswered goals from Alexander Pavlovich, Artur Gavrus and Alexander Materukhin put the issue beyond doubt. Matt Gilroy got a power play goal for Spartak in the third but there was no way back. 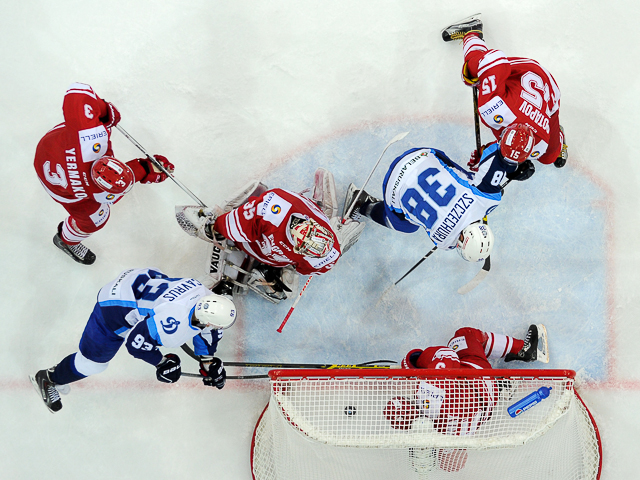 Medvescak pounced on a last-gasp error from former goalie Barry Brust to snatch a 2-2 tie at home to Slovan but still missed out in overtime. When the teams met eight days ago the Slovaks had grabbed a last-minute winner but this time Marek Kvapil’s late marker forced the game into overtime before Tomas Starosta could give the visitor the win. Earlier Slovan raced into a 2-0 lead through Marek Viedensky and Ziga Jeglic before Colby Genoway pulled one back in a breathless opening to the game.

Dinamo Riga enjoyed a win at the end of its long trip to Vladivostok, downing Admiral 4-2. Roberts Bukarts opened the scoring in the seventh minute but Dmitry Lugin tied it up early in the second. After that, though, Dinamo was on top. Mikelis Redlihs made it 2-1 before two power play goals early in the third saw Ville Leino and Krisjanis Redlihs take it out to 4-1. Niclas Bergfors pulled one back late on.

Andrei Stas got the only goal as Neftekhimik won 1-0 at home to Metallurg Novokuznetsk. Alexander Sudnitsin made 25 saves to claim his shut-out.

Harri Sateri was the star as Vityaz got an overtime win at home to Torpedo. The Finn made 31 saves to keep the visitor at bay; Teemu Eronen got the winner 30 seconds before the end of overtime. 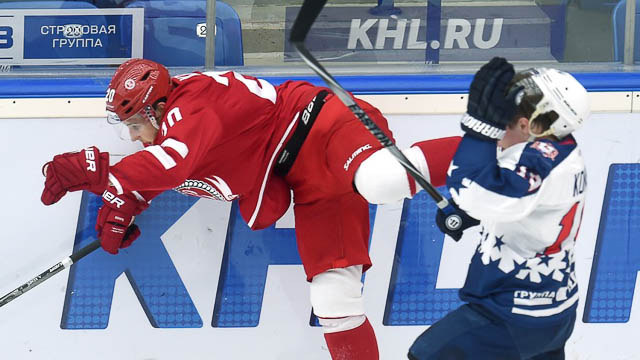