Ak Bars paid tribute to legendary captain Alexei Morozov – but Salavat Yulaev crashed the party to win in a shoot-out.

The pre-game formalities seemed to knock the home team off its stride as the visitor raced to a 2-0 lead in the first period. Dmitry Makarov and Denis Khlystov got the goals to put Salavat in control.

But the middle session saw Ak Bars hit back: Oscar Moller scored early in the period and Mattias Sjogren tied it up shortly before the intermission. When Dmitry Arkhipov made it 3-2 midway through the third it seemed that the outcome would go according to the celebratory script.

Not so. Nikolai Prokhorkin snatched a dramatic equalizer with nine seconds left to play and in the shoot-out Linus Omark settled it in Salavat’s favor.

Alexander Radulov had one goal and two assists as the Army Men overpowered Avtomobilist. The talismanic forward opened the scoring on the power play, putting Igor Ozhiganov’s pass upstairs in the 10th minute.

Then he helped Stephane da Costa’s get the second goal of the game before taking a break to enable Dmitry Kugryshev to get the third in the 22nd minute.

Avto’s Oleg Saprykin got one back midway through the middle session but Radulov wasn’t done yet. On another power play he returned Ozhiganov’s first-period favor to complete the scoring and return CSKA to the top of the Western Conference. 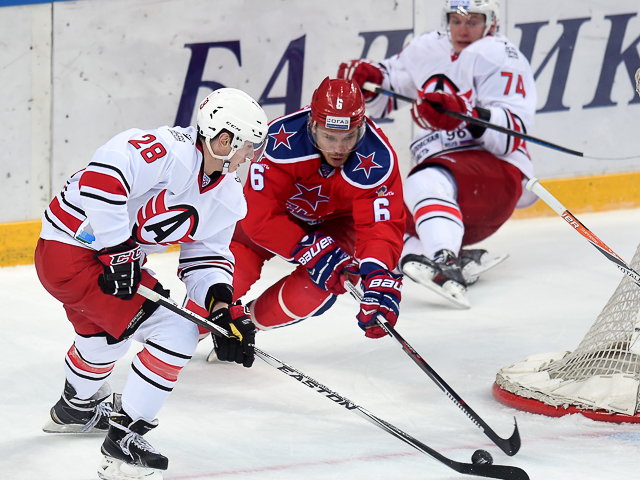 Metallurg Magnitogorsk edged a 4-3 verdict at struggling Severstal after holding off a recovery from the host. Magnitka opened up a 3-0 lead through Denis Platonov, Evgeny Timkin and Jan Kovar. But around the midway point Severstal clawed the scores back to a single-goal margin thanks to Yury Trubachyov and Andrei Shefer. Danis Zaripov gave Metallurg further breathing space; Pavel Buchnevich reduced the deficit yet again.

Ugra claimed a 2-1 win at Lada thanks to second-period goals from Igor Volkov and Nikita Gusev. Alexander Bumagin got a consolation effort for the home team.