On the KHL’s Eastern-most shores, the Western Conference found a new leader. Jokerit blasted six goals past Admiral to post its sixth win in seven games and overtake CSKA.

It was a big performance from Brandon Kozun to spark Jokerit’s win. The Canadian forward posted 2+2 on the night, taking his tally to 11 points in his debut KHL campaign. Kozun’s first contribution came in the second minute with an assist on Peter Regin’s opener before Topi Jaakola doubled the lead in the first period. Kozun then made it three off a Regin assist early in the middle session.

There was more to come: Ville Lajunen made it 4-0 on the power play before Yaroslav Alshevsky got Admiral on the scoreboard at last. But Kozun had the last words, assisting on Mathis Olimb’s goal before completing the scoring himself.

Avangard out in front

Avangard opened up a three-point cushion atop the KHL table thanks to another good goaltending display from Dominik Furch. The Czech made 27 saves to keep Loko at bay and lead Avangard to its seventh win of the season.

Chances were at a premium at both ends: Alexander Popov broke the deadlock late in the first period but the game was in the balance until late on. Loko had more chances in the middle session but couldn’t force a breakthrough, only to be punished in the final session. Vladimir Sobotka got the second goal and Alexander Perezhogin wrapped it up with an empty-netter. 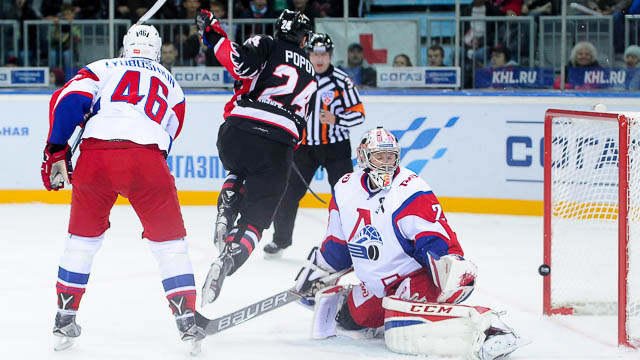 Barys recovered from 0-2 to win in overtime against HC Sochi. Nigel Dawes got the decider three minutes into the extras. Earlier Nikita Shchitov and Evgeny Skachkov put the visitor ahead, only for Nikita Mikhailis and Kevin Dallman to tie the game.

Two goals for Danil Faizulin and a first of the season for Dmitry Tarasov set Amur on the way to victory against Dinamo Riga. The home team went 3-0 up in the first period and held on to the points despite the Latvians hitting back through Roberts Bukarts and Kaspars Saulietis.

Slovan picked up a second successive win with a 5-2 verdict at Vityaz. Milan Bartovic scored twice for the visitor, while defenseman Filip Novak marked his second appearance of the season with a goal. Alexei Makeyev got two for Vityaz in reply. 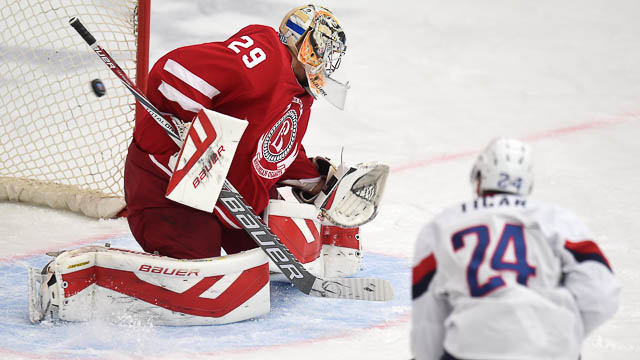