Last season it was argued that the Eastern Conference had fallen behind its Western rival. This season the sight of Salavat Yulaev and Ak Bars making indifferent starts while CSKA and Jokerit hit their stride from the start reinforced that impression for many observers.

But on a day of direct conflict between the two competitions, at the top and the bottom of the table, it was the east that showed greater promise.

Metallurg came from behind to win its heavyweight battle against CSKA, while Salavat Yulaev triumphed in the basement battle at Severstal.

In Moscow it was the ever-reliable power play combination of Sergei Mozyakin and Jan Kovar tipping the scales Magnitka’s way.

CSKA, leading the pack early in the season, got ahead in the opening stanza when Nikita Zaitsev rifled home a power play goal off a Stephane da Costa pass.

But the middle session turned the scoreline upside down as Magnitka hit back. First Kovar tied it up, collecting Mozyakin’s pass to the slot and scoring at the second attempt. Five minutes later Kovar returned the favor, coming off the boards to play in Mozyakin in the deep slot. A laser of a wrist shot found Stanislav Galimov’s top corner and ultimately decided the game.

CSKA’s hopes of retrieving a result were wrecked in the closing stages when Igor Makarov was handed a 5+20 penalty for kneeing and Mozyakin – this time with an assist from Danis Zaripov – added a third into the empty net. 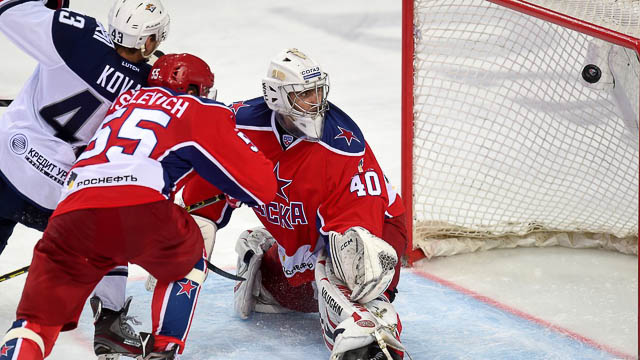 The battle of the basement dwellers in the two conferences ended in victory for Salavat Yulaev at Severstal.

The visitor drew first blood thanks to Linus Omark’s 12th-minute goal but was pegged back when Severstal tied it up with a short-handed marker from Dmitry Kagarlitsky late in the first period.

Kagarlitsky’s form has been one of the few bright spots for the Steelmen this season but the forward can’t win games on his own and Salavat Yulaev regained the lead in the middle session through Ivan Vishnevsky.

Salavat moves off the foot of the Eastern Conference, overtaking Amur; Severstal now sits in last place in the KHL table.