Avangard blitzes back to the summit. September 10 round-up

A five-goal salvo in the second period saw Avangard regain top spot with a crushing home win over Lada.

The Omsk team held the initiative after the opening session thanks to Sergei Shirokov's goal, but blew the game out of the water after the intermission. Artur Lauta doubled the lead and Shirokov added his second of the night to leave Lada reeling - and there was worse to come.

Three goals in four minutes just after the halfway mark saw Alexander Perezhogin, Vladimir Sobotka and Nikolai Lemtyugov stretch the lead to 6-0. Anton Shenfeld converted a late penalty stroke to get Lada on the scoreboard, but Avangard roared to victory.

Vadim Shipachyov returned from suspension to score two points as SKA romped to victory at Admiral.

The international forward scored his team's third goal on the power play after a combination involving Anton Belov and Anton Burdasov. Later Shipachyov was part of the same trio on another power play, with Burdasov claiming the fifth goal for the defending champion.

Earlier Admiral held the lead at the first intermission thanks to Jonathan Blum's early goal. But the middle stanza turned the game around in emphatic style when Alexander Dergachyov tied the scores with his first eve KHL marker and Evgeny Ketov got the first of his two for the night before Shipachyov got on the scoresheet. 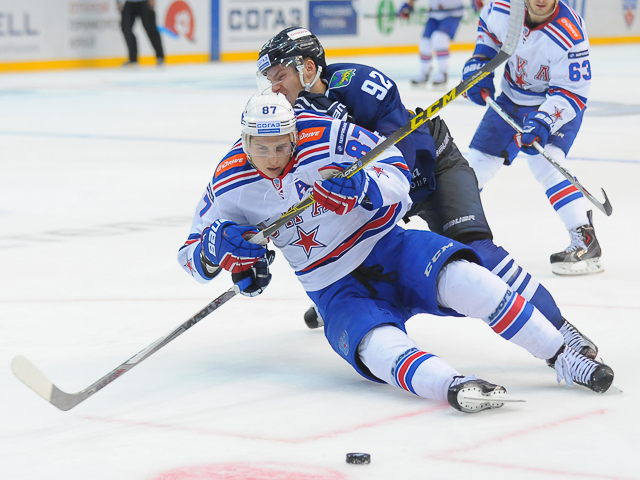 Spartak's return to KHL action has not been as smooth as many had hoped - going into Thursday's game the Red-and-Whites managed just one win this season, an overtime success on opening night.

But out in the Far East, German Titov's men claimed a second victory of the campaign at Amur, climbing off the foot of the table in the process.

Maxim Potapov put Spartak ahead after just 66 seconds before Vyacheslav Leshchenko doubled the lead when he finished off a well-worked move involving Lukas Radil and Artyom Voronin. The home side recovered with a power play goal from Ruslan Bashkirov in the middle stanza but that was the end of the scoring.

A power play goal from Niklas Hagman just seven seconds before the hooter gave Jokerit all three points in Siberia.

The Finns had squandered a 2-0 lead and seemed set for overtime when Mikhail Kuklev was sin-binned on 59:17. Jokerit plotted its response and snatched victory when Hagman forced home the rebound from his own shot to make it 3-2.

Earlier Jani Rita and Brandon Kozun had put Jokerit ahead in the first period but Vadim Mitryakov and Maxim Kazakov hauled Metallurg back into contention.

Struggling Slovan picked up a morale-boosting win at Dynamo Moscow. Lukas Kaspar put the Slovaks ahead in the first period and Vladimir Migalik stretched the lead in the 26th minute. Mat Robinson, Dynamo's most impressive performer this season, got one back but the Blue-and-Whites could not claw back another goal.

Avtomobilist's bright start is showing signs of stalling: the Yekaterinburg team suffered a second successive defeat, going down 4-1 at home to HC Sochi. Andre Petersson was the Sochi star once again, getting his team's first two goals either side of Yegor Zhuravlyov's marker for the host. Avto couldn't find a way back into it and gave up two more scores in the final period when Dmitry Kazionov and Evgeny Skachkov found the net.

Traktor's goal drought extended to three games after firing more blanks in a 3-0 reverse at Torpedo. Ilya Proskuryakov was the latest goalie to shut out the Traktor offense, making 21 saves. Sergei Kostitsyn (2) and Vladimir Galuzin got the goals; Proskuryakov claimed an assist along the way.

Barys won 3-1 against Ak Bars in the battle of the snow leopards. The first period was close, with Roman Starchenko putting the home team ahead before Mikhail Varnakov brought Ak Bars level. But Brandon Bochenski and Evgeny Rymarev put Barys in command after that.

Sibir moves up to third in the Eastern Conference with a 4-1 win at home to Dinamo Riga. Maxim Shalunov, Sergei Shumakov and Vladimir Butuzov opened up a 3-0 lead with a goal in each period; the team's traded late strikes to complete the scoring.

Nikita Gusev's power play goal midway through the game was enough to give Ugra a 2-1 win over Lokomotiv. Mikhail Pashnin put Loko 1-0 up early on by Pavel Medvedev tied it up late in the first period.

Nikita Vyglazov settled a shoot-out in favor of Vityaz after a 3-3 tie with Medvescak. Both teams held the lead during regulation but Teemu Eronen's equalizer early in the third period put Vityaz level and forced overtime. 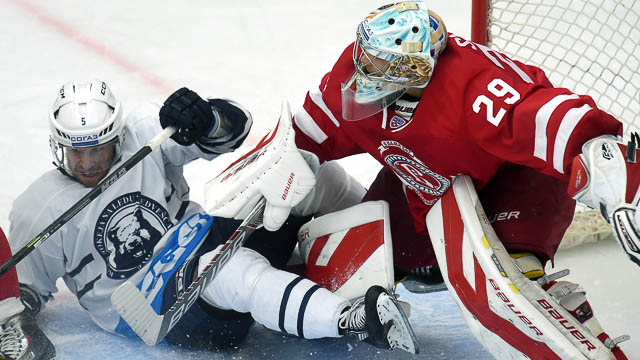