After two defeats at the start of its Far Eastern tour, SKA returned to form at Amur with a 3-0 victory.

The first period was goalless and the breakthrough did not come until late in the second when Anton Burdasov finally solved Evgeny Alikin. Evgeny Ketov doubled the lead in the 39th minute to deflate Amur's hopes of victory.

Jarno Koskiranta completed the scoring early in the third, while Mikko Koskinen stopped 32 shots for a shut-out. 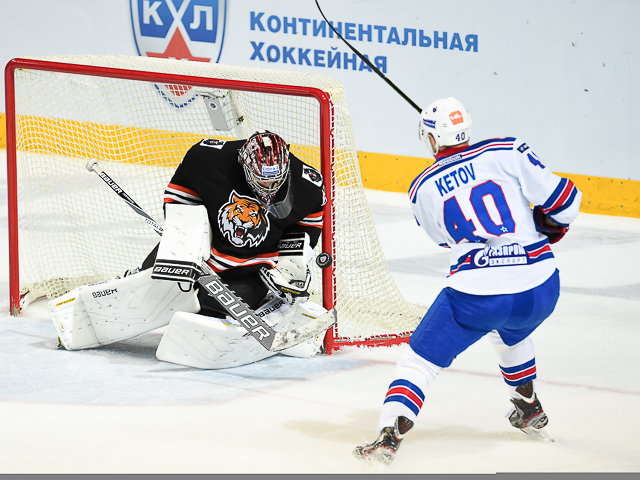 The game of the day saw Avangard aim to bounce back from a defeat at Magnitka by downing an Ak Bars team looking to overcome a slow start to the season. However, the outcome was the same as in Magnitogorsk: Avangard lost out in a shoot-out after a 2-2 tie.

Fyodor Malykhin settled a hard-fought battle as the Kazan team delivered a flawless shoot-out display to take the bonus point and repeat its 3-2 scoreline from Ugra last week.

Earlier the game took some time to ignite, with few good chances until Justin Azevedo gave Ak Bars the lead halfway through the game. But the third period delivered more goal action: the home team tied it up on 46:05 through Michal Kempny and went ahead in the 56th minute on the power play when Alexander Chernikov scored. That lead lasted just a few seconds, though, before Malykhin set up Vladimir Denisov for the equalizer.

Avtomobilist missed a chance to extend its lead at the top of the table after suffering an overtime loss to Lokomotiv - but did well to claim a tie in regulation after trailing 0-2.

Loko took control in the first period, with goals from Yegor Averin and Daniil Apalkov opening up that advantage. That lead lasted throughout the scoreless middle session as chances were at a premium at both ends of the ice.

Finally Avto got on the scoreboard in the 46th minute thanks to Petr Koukal and tied the game with four minutes to play through Alexander Pankov. That took the game to overtime, but there were just 17 extra seconds for Jonas Enlund to win it for Loko.

Six of the best for Lada

Lada snapped a three-game losing streak in emphatic style with a crushing win at Barys, paced by two goals each for Alexander Streltsov, Martin Zatovic and Andrei Nikitenko.

There was little indication of what was to come in a tight, even first period which finished goalless despite Barys edging the shot-count 13-10.

But the game swung decisively early in the second. Streltsov struck in the 23rd and 25th minutes, and just 15 seconds later Zatovic got his first of the evening.

That was the end of the game for Barys goalie Pavel Poluektov, who was replaced by Dmitry Malgin. The incoming goalie also gave up three goals, two more in the second period and Nikitenko's second marker midway through the third.

Dynamo Moscow's Juuso Heitanen scored two first period goals to get his team on the way to a 2-1 win at home to Medvescak. But after that dominant start, the Blue-and-Whites wobbled; comprehensively outshot in the rest of the game they had goalie Alexander Lazushin to thank for his 33 saves. Tuukka Mantyla got Medvescak's goal. 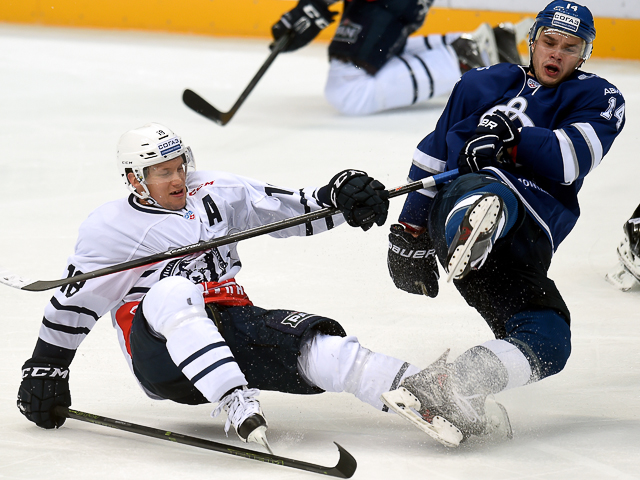 Two goals in 20 seconds turned around Ugra's game at home to HC Sochi, giving the Khanty-Mansiysk men a 3-2 success. Igor Volkov tied the scores on 45:20 before Pavel Medvedev grabbed the game winner moments later. Andre Petersson scored twice for Sochi in a losing cause.

Jokerit's offense peppered Sibir with shots on the way to a 2-0 win in Novosibirsk. The bulk of the action came in the second period, when 19 shots resulted in both goals, with Jesper Jensen and Pekka Jormakka finding the net. Riku Helenius made 22 saves at the other end.

Ryan Vesce paced Dinamo Minsk to a 4-0 win over Traktor. He got the opening and closing goals of the game, while Alexei Kalyuzhny and Charles Linglet also found the target. Jeff Glass had 24 saves as Traktor failed to score for the second game in a row.

Admiral recovered from an early goal to beat Spartak 4-1. Alexander Vasiliev put the visitor up in the fifth minute but two goals each for Dmitry Lugin and Artyom Podshendyalov put Admiral on course for success. 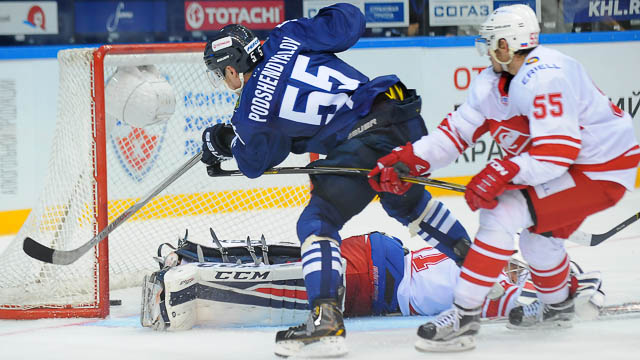 In Novokuznetsk the game followed a similar pattern as Dinamo Riga beat Metallurg by the same scoreline. Maxim Kazakov opened the scoring for the home team but Miks Indrasis tied it up in the first period. A scoreless middle session was followed by goals from Gints Meija, Tim Sestito and Mikelis Redlihs in the third.

Mikhail Zhukov got the overtime winner for Neftekhimik at Torpedo. He struck 40 seconds into the extras after a 1-1 tie. Torpedo's Dmitry Semin cancelled out Geoff Taffe's opener.