CSKA began its evening by paying tribute to Evgeny Davydov, a member of its invincible roster from the late 1980s and 1992 Olympic Champion, and concluded by despatching Traktor 3-0.

It was no coincidence that the CSKA vs. Traktor fixture was chosen to raise Davydov’s pennant to the rafters of the CSKA Arena: the forward began his career in Chelyabinsk and played his first pro season in Traktor’s colors before being called up to the Army Men.

With the formalities completed the modern-day CSKA eased to a comfortable victory. After failing to turn opportunities into goals in the opening session, the second period saw the host take control. Markers from Igor Ozhiganov and Geoff Platt opened up a 2-0 lead before a late short-handed goal from Mikhail Yunkov wrapped up the scoring. Stanislav Galimov made 15 saves for his shut-out. 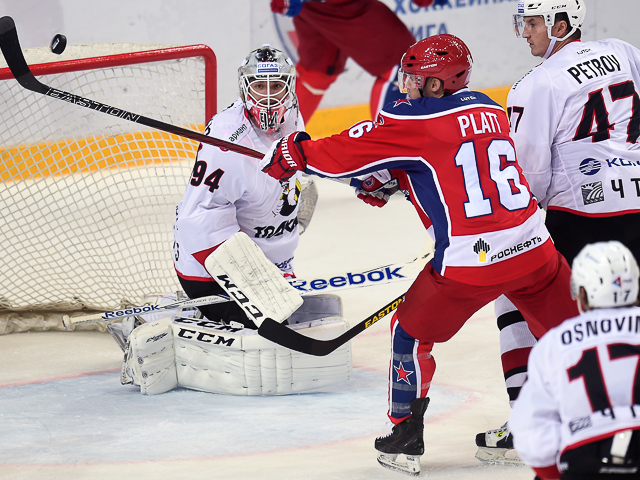 On paper this game looked like a mismatch between the defending champion and one of the league’s perennial outsiders. More than just geography separates these two teams, with Metallurg struggling on a limited budget year-on-year while SKA enjoys some of the best funding in the competition.

But on the ice it proved to be a very different story. Kuznya battled hard from the off and grabbed two early goals to set up a memorable victory in a game that was often even in terms of chances and possession.

SKA ran into trouble early on: Vadim Shipachyov’s game lasted just 71 seconds before he was expelled for boarding and that power play saw Maxim Kazakov and Nikita Yazkov open up a 2-0 lead. Evgeny Dadonov pulled one back with a solo effort on a delayed penalty midway through the first period but that didn’t discourage the host. Ryan Stoa made it 3-1 in the second period and Kirill Kaprizov got the game-winner early in the third.

SKA refused to bow down and hauled it back to a single goal thanks to Joakim Lindstrom’s efforts in the closing stages. First he scored on the power play, then he set up Dadonov’s second of the night in the 57th minute. But it was too late to salvage a result for SKA.

Elo puts Avtomobilist out in front

Six games into the season and unheralded Avtomobilist is on top of the KHL table. A 4-1 win over Lada made it five wins from six to keep the Motormen cruising away in first place.

The latest success came thanks to Finnish forward Eero Elo. He got his first goals of the campaign to set Avto on the right road here. After Elo’s first strike Lada tied it up through Semyon Valuisky but when he made it 2-1 late in the second there was no way back.

A trio of power play goals gave Ak Bars a morale-boosting win at Ugra. The men from Kazan have yet to hit top form this season, but a resilient performance in Khanty-Mansiysk suggests that those early teething problems could soon be under control.

Alexander Svitov opened the scoring late in the first period only for Andrei Ivanov to tie the scores early in the second. But another power play saw Justin Azevedo put the visitors back in front midway through the session.

That wasn’t the end of Ugra, who tied it up yet again with a power play goal of its own from Alexander Shevchenko but when Alexander Ugolnikov was sin-binned for holding, Artyom Lukoyanov exacted the maximum punishment to settle the outcome.

Sibir kept up its good start to the season with a 2-1 win at home to Spartak – a result that leaves the revived Moscow club rooted to the foot of the table. Spartak had more shots on goal but only a power play effort from Maxim Potapov could beat Alexander Salak; Maxim Ignatovich and Ivan Vereshchagin got Sibir’s goals. 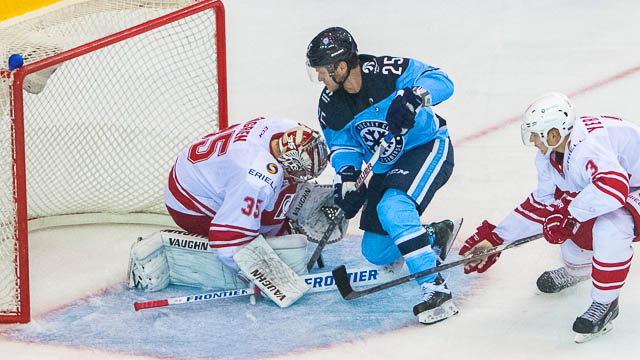 Barys battled back from an early 0-2 deficit to win 4-3 at home to Lokomotiv. Dmitry Maltsev and Vladislav Gavrikov put Loko up early on but Roman Starchenko and near name-sake Roman Savchenko tied it up before the first interval. Martin St-Pierre and a second Starchenko goal got Barys in front in the middles session before Vladislav Kartayev pulled one back for the visitor.

Slovan grabbed a last-minute winner to settle a wild affair against Medvescak. Marek Viedensky snatched a 3-2 win for the Slovaks on 59:18, to end a game that turned around the final period. Marek Kvapil’s power play goal had Medvescak up early on, but Cam Barker and Vaclav Nedorost scored just 34 second apart to wipe out that lead. Tomas Mertl’s late equalizer proved to be in vain. Two players, Michal Sersen of Slovan and Gilbert Brule of Medvescak, were expelled from the game in separate incidents.

Carl Klingberg continued his impressive start to the season by getting the only goal as Torpedo beat Vityaz. Ivan Lisutin made 28 saves for the shut out.

Two goals from Evgeny Grigorenko paced Neftekhimik to a 4-1 win at Severstal. He got the second and fourth goals, while Mikhail Zhukov and Kirill Lyamin also found the net for the visitor. Dmitry Kagarlitsky scored Severstal’s consolation.