If you’re looking for hockey value for money, Zagreb might be the place to choose. Five games into the season, Medvescak has gone into overtime on three separate occasions. And, to the delight of the home fans, two have those have ended in victory – a run that helped the Croatians assume the early leadership of the Western Conference.

On Thursday, against Dinamo Riga regulation finished 1-1. Medvescak got ahead with a power play goal from Stefano Giliati, the Italian’s first goal in the KHL. It took just seven seconds for the Bears to convert their first power play of the night, but that wasn’t enough to set up a victory. Instead Dinamo tied it up through Andris Dzerins with eight minutes to play, setting up a familiar round of extras.

This time, though, the script changed a little: after two shoot-outs, Medvescak managed to claim victory in overtime. Dinamo’s Miks Indrasis was sin-binned and Marek Kvapil took advantage to seal the points.

Loko made short work of Sochi, powering to a comfortable win on home ice. The scoring started early with Sergei Konkov finding the net in the sixth minute, and Daniil Apalkov’s goal doubled the lead before 10 minutes were up.

A powerful strike from the blue line by Patrik Hersley extended the lead in the middle session as Sochi’s challenge faded. The visitor did have some chances, most notably a solo rush for Mikhail Anisin, but could not trouble goalie Alexei Murygin.

The third stanza was scoreless, with Murygin ultimately making 29 saves for his shut-out as Lokomotiv climbs to second in the Western Conference. 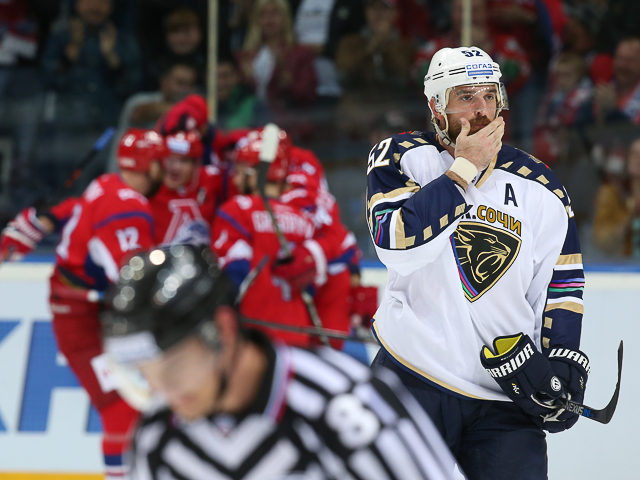 Parshin the architect of Avangard win

Salavat Yulaev battled back from 0-2 down but still ended up losing at home to Avangard. The early leader in the Eastern Conference took the initiative in the first period with Anton Kuryanov converting the first power play of the night in the 3rd minute before Ilya Zubov doubled the lead right before the hooter.

But the middle session saw the home team, with just one win so far this season, find a way back into the game. Summer signings Linus Omark and Igor Grigorenko scored barely a minute apart to tie the scores early in the stanza.

It wasn’t enough, though. Avangard weathered that storm and claimed victory thanks to a Vladimir Sobotka goal in the 53rd minute. Denis Parshin had a hand in all three Avangard goals, while Sergei Shirokov also contributed two assists. 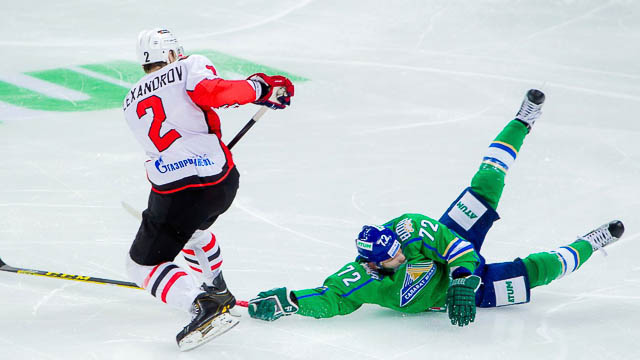 Danis Zaripov was the shoot-out star as Magnitka rallied from 0-2 to defeat Barys. The Kazakh team got off to a great start with its prolific forwards reaping rewards once again. Dustin Boyd and Nigel Dawes opened up a 2-0 lead in the first period.

Magnitka hit back early in the second when Evgeny Biryukov’s shot deflected off a defenseman and went in, halving the deficit. Then, with just seven seconds left before the second intermission a well-worked power play goal tied the game. Jan Kovar won the face-off and fed Chris Lee, who slipped the puck along the blue line to Sergei Mozyakin for yet another goal from the Metallurg captain.

Neither team could find a breakthrough in the third period, nor in overtime, but Zaripov delivered with his first attempt in the shoot-out and that proved sufficient to give Magnitka the win.