The A teams. September 1 round-up

Avangard and Avtomobilist lead the way in the East

It’s early days in this season’s KHL, but there are already promising signs for Avtomobilist Yekaterinburg and evidence that Avangard Omsk will be a force in the coming campaign. The pair both won again on Tuesday, opening up a two-point cushion on the rest of the Eastern Conference.

For Avto, a team usually expected to be battling on the fringes of the play-off race, the latest success – a 5-4 triumph at the struggling power house of Salavat Yulaev – followed a good result in Magnitogorsk on Sunday. Indeed it could have been more convincing: the scoreline was 5-2 until a couple of late goals made things more respectable for the hosts.

The key goal was Avto’s third, scored by Alexander Andreyev late in the second. That snapped a 2-2 tie after Salavat had recovered from giving up a pair of scores midway through the opening session. Alexei Vasilevsky and Oleg Saprykin – playing against one of his former clubs – extended that advantage in the third.

Avangard also won on the road, downing Neftekhimik 4-1 in Nizhenkamsk. After a goalless opening period the visitor cashed in on two Neftekhimik penalties, scoring through Denis Kulyash and Nikolai Lemtyugov either side of the 30-minute mark. The familiar sight of Alexander Perezhogin and Sergei Shirokov celebrating markers of their own followed before Jeff Taffe got a late consolation goal.

Jan Mursak was the architect of CSKA’s convincing win over Dinamo Riga. The Slovenian forward opened the scoring and weighed in with two assists in a 5-0 drubbing. And it was a strong performance all over the ice, with strong defense limiting the Latvians to just 17 shots at Stanislav Galimov.

Mursak opened the scoring in the seventh minute but Dinamo remained in contention until the second period, when the Army Men finally turned pressure into goals. Geoff Platt scored on the power play before Mursak helped Bogdan Kiselevich make it 3-0.

Any lingering doubts about the outcome were quashed early in the third as goals from Alexander Kutuzov and Dmitry Kugryshev – the latter off another Mursak assist – left Dinamo with far too much to do. 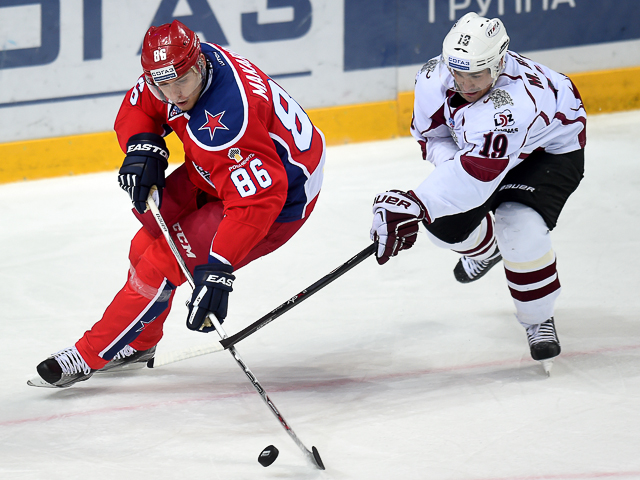 For the first time this season – and the first since moving to its new arena – Dynamo Moscow tasted defeat in the KHL. Unexpectedly the conqueror was Admiral, a team that spent the summer all at sea after the defection of much of the playing staff and that arrived in Moscow on the back of a grueling four-game tour of the league’s Western-most expanses.

And yet the team roared into an early lead and despite a strong home fightback held on to take victory thanks to Nikita Filatov’s decisive goal in the shoot-out after a 3-3 tie.

Admiral could hardly have had a better start to the game: after 18 minutes the Far East team led 3-0. Oskar Bartulis, Dmitry Lugin and Denis Osipov did the damage for Admiral as Blue-and-White starting goalie Alexander Sharychenkov was back on the bench in favor of Alexander Lazushin..

But the host recovered. Slowly but steadily goals from Denis Kokarev, Alexander Osipov and finally, on 48:00, Martins Karsums, tied the game while Lazushin proved strong enough to stop anything that Admiral could throw at him until Filatov’s penalty shot settled the outcome. 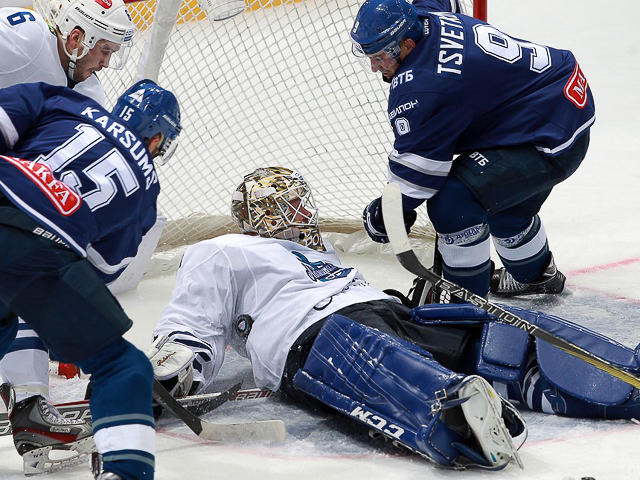 Metallurg Magnitogorsk’s offense finally clicked into gear, powering to a 6-2 win over Ugra after Sunday’s stumble against Avtomobilist.

It took a bit of luck to open the scoring, with Wojtek Wolski’s pass deflecting into the net off the skate of defenseman Kirill Dyakov, but after that Magnitka took control. Viktor Antipin extended the lead early in the second and Yaroslav Khabarov made it 3-1 after Alexei Vasilchenko got one back for Ugra.

Vityaz edged Amur 2-1 in a game where all the goals came in the second period. Vyacheslav Solodukhin put Vityaz up in the 22nd minute only for Tomas Zogorna to tie the scores in the 36th. Parity lasted just two minute before Yury Koksharov got the winner. 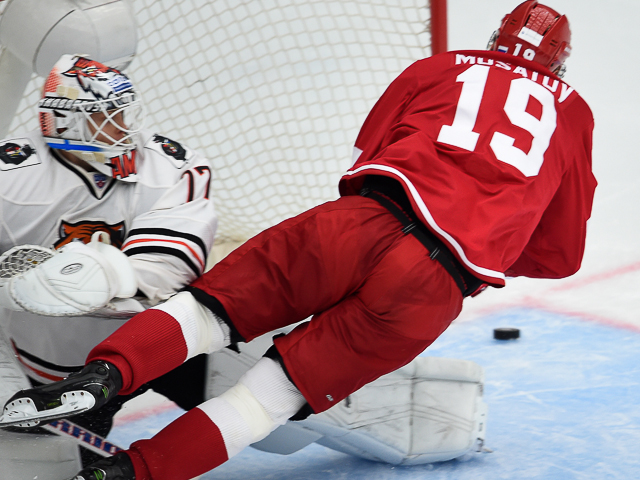 Sibir won 3-2 at Slovan – but had to do it the hard way. The visitor opened up a 2-0 lead through Maxim Shalunov and Sergei Shumakov early in the second, but was hit by a home fightback that saw Andrej Stastny and Lukas Kaspar tie it up. The winner came in the last five minutes when Shalunov got his second of the night despite a Slovan power play.

Traktor won 2-1 at home to Barys. The first goal came when Semyon Kokuyov forced home the puck after Alexander Rybakov’s shot sewed panic on the Barys crease: the video refs confirmed that the goal was good. Francis Pare doubled the lead midway through the game, with another Rybakov assist, before Vadim Krasnoslobodtsev’s power play goal reduced the deficit in the closing stages.

Medvescak led three times at home to Metallurg Novokuznetsk, with Patrick Bjorkstrand scoring twice, but still needed a shoot-out to take the win. The visitor kept battling back, tying the game at 3-3 in the 58th minute when Maxim Kazakov’s second of the night took us to overtime and penalties. The shoot-out also saw Metallurg respond twice after trailing but Colby Genoway finally settled it.