A second-period masterclass saw Torpedo sink Spartak at Luzniki. The first period went well for the host: the Red-and-Whites had the edge on the shot-count and made that advantage tell right on the hooter as Andrei Yermakov opened the scoring.

But that was as good as it got for Spartak as Torpedo rallied strongly after the intermission. Alexander Frolov and Nikita Dvurechensky turned the game around, then Carter Ashton and Carl Klingberg stretched the lead to 4-1. Klingberg, a new arrival in the KHL, has adapted quickly to the league: three goals and an assist in four games suggest that Torpedo might have unearthed a star.

The teams traded one more goal apiece: Matthew Gilroy struck a short-handed effort for Spartak before young Daniil Ilyin continued his bright start to the season with the fifth goal for Torpedo.

Mikhail Anisin handed HC Sochi a 2-1 win over Lokomotiv, snapping a 1-1 tie midway through the third period to settle the outcome.

But Anisin’s decisive goal was preceded by two fine saves from Konstantin Barulin as Loko pushed for a winner. Emil Galimov and Yegor Averin brought the best out of the Russian international but could not find a way past his defenses.

Earlier the teams traded first period goals: Nikita Shchitov put Sochi ahead only for Averin to tie it up on the power play ahead of a scoreless – and almost chance-free – middle session. 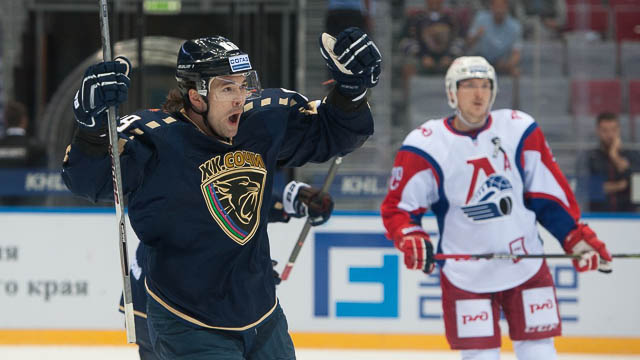 No Kovi, no problem for SKA

Defending champion SKA eased to victory at Severstal despite the absence of Ilya Kovalchuk. Even without the captain it took little time for Andrei Nazarov’s men to get ahead: Anton Burdasov’s third-minute effort set the scoreboard in motion.

Home goalie Jakub Stepanek frustrated the visitor in the second period, making 12 saves to keep SKA from scoring. But a five-on-three power play in the third took the game out of reach. Maxim Chudinov converted that chance and Torpedo had barely got back to full strength before Evgeny Ketov scored on his former club.

That completed a happy return to Cherepovets for former Severstal head coach Nazarov and ex-Steelmen Ketov and Vadim Shipachyov.

Ak Bars powered to a 4-1 win at Lada, thanks to two Mikhail Varnakov goals in quick succession in the first period. Varnakov opened the scoring on the power play, tipping home Oscar Moller’s shot from the blue line. Then, barely two minutes later, he doubled his tally with a backhand that beat Edgars Masalskis.

The middle session followed a similar pattern with two more unanswered Ak Bars goals. Dmitry Obukhov made it three before Moller added to his earlier assist with the fourth marker of the night.

The only disappointment for the visitor came with just four seconds left to play when Alexei Mastryukov shattered Emil Garipov’s hopes of a shut-out by scoring a consolation goal for Lada.