After two narrow home wins Dynamo’s offense finally clicked into gear with a seven-goal show at home to Amur. Visiting goalie Juha Metsola, the star of his team’s win on Friday, had no answer to a resurgent Dynamo as the Blue-and-Whites powered to what was briefly the biggest victory in the KHL so far this season.

It didn’t take long to settle the outcome: Dynamo raced into a 3-0 lead inside 17 minutes through Maxim Karpov, Mat Robinson and Konstantin Glazachev. The pattern continued in the second with Alexei Tsvetkov, Konstantin Volkov and Kaspars Daugavins stretching the lead to 6-0 before a power play effort from Vyacheslav Litovchenko finally got Amur on the board.

It made little difference as Denis Kokarev made it 7-1 before the second intermission. Amur had a better time in the third session as Dynamo allowed the pressure to drop. Konstantin Sokolov added a consolation goal to make the final score 7-2. 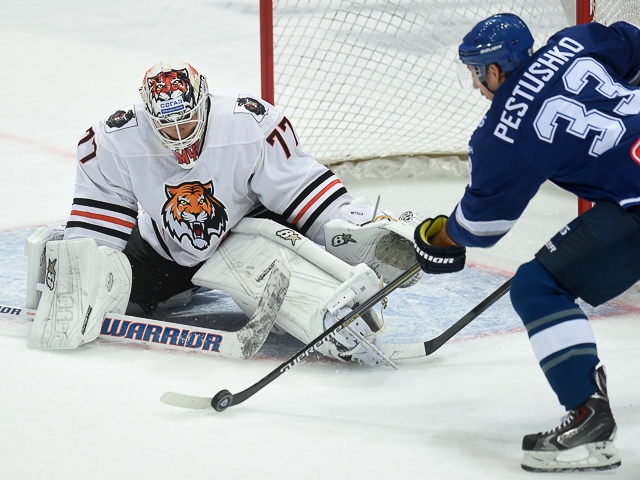 After two false starts Slovan managed its first win of the season – and delivered it in some style against Kuznya. The six-goal margin was the biggest victory of the season so far, a stand-out result in a campaign that has been dominated by close scorelines in the opening week.

A powerful performance in the first period put Milos Riha’s men in control with goals from Ziga Jeglic, Ivan Svarny and Cam Barker. That prompted the visitor to replace goalie Vladislav Podyapolsky with Filip Novotny for the start of the second period.

The change slowed Slovan’s scoring but made little impact on the game as a whole. Lukas Kaspar made it 4-0 late in the second and Andrej Stastny added a fifth early in the third. David Skokan wrapped it up late on while Michael Garnett, a summer signing in Bratislava, completed his first shut-out for the club with 17 saves.

A pair of first period goals – including a short-handed effort in the final seconds of the session – saw Avtomobilist defeat Magnitka.

Both goals came from defensive errors: the first was a turnover in center ice that saw Alexander Pankov shoot against the post before Alexander Torchenyuk put away the rebound. The second came as Magnitka’s power play misfired, presenting Avto with a two-on-one breakaway that Vitaly Popov converted.

Jan Kovar pulled a goal back early in the second period, beating his brother Jakub from close range, but despite having more shooting chances the home team could not force an equalizer and suffered its first loss of the 2015-16 season.

Avangard on top of Eastern Division

Avangard joined Avtomobilist on seven points from three games to take the early leadership of the Eastern Conference.

All the scoring in Chelyabinsk came in the first period, with the visitor opening up a 2-0 lead before Traktor reduced the deficit. The decisive passage of play came midway through the session: Anton Kuryanov’s 11th-minute goal was followed by Sergei Shirokov’s marker 45 seconds later, prompting Traktor to replace goalie Pavel Frantsouz with Vasily Demchenko.

Demchenko kept Avangard at bay for the rest of the game, but at the other end Traktor could only manage one goal in response. Semyon Kokuyov scored in the 16th minute but that was the end of the day’s scoring.

Two goals from Igor Grigorenko helped Salavat Yulaev to its first win of the season – a 4-2 triumph at home to Ugra. Early goals from Andreas Engqvist and Yegor Dubrovsky put the host in control before Grigorenko got to work. Artyom Bulyansky and Mikhail Mamkin threatened to launch a fightback for Ugra, but Grigorenko added a fourth to settle the outcome. 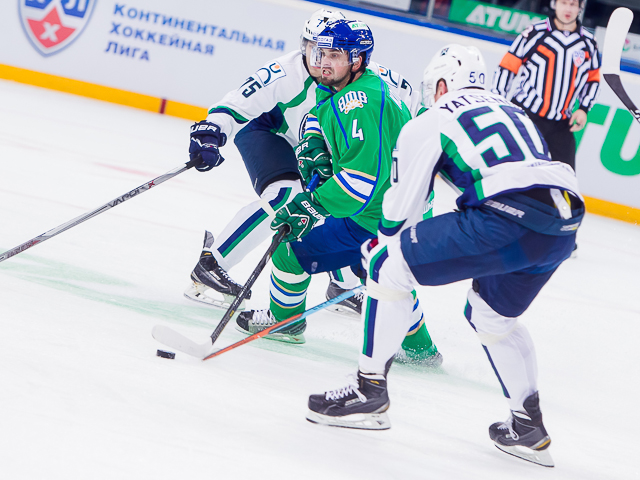 Medvescak surprised Sibir with a 4-2 win in Zagreb. Mike Glumac marked his 100th appearance for the Bears by opening the scoring before Simon Gysbers and Geoffrey Kinrade took it to 3-0 and Sibir swapped goalies. That prompted a swift response, with David Ullstrom and Maxim Shalunov scoring quickly to make it 3-2. Patrick Bjorkland ended the fightback, making it 4-2 early in the third, and Medvescak held on despite losing starting goalie Danny Taylor to injury.

The Dinamo derby finished in Riga’s favor following a comfortable 4-0 win in Minsk. After a scoreless opening session the Latvians took control with two goals either side of the halfway mark through Gunars Skvorcovs and Tim Sesito. Hopes of a home recovery were ended in the 55th minute thanks to two more quick goals: Mikelis Redlihs and Gints Meija completed the scoring. Jakub Sedlacek made 32 saves for his shut-out.

Neftekhimik downed Barys thanks to a strong finish to the second period. The game was deadlocked until Mikhail Zhukov, Tim Kennedy and Andrei Stas scored three goals in five minutes to put the home team in charge. Maxim Berezin and Evgeny Grigorenko took the lead to 5-0 in the third before late goals from Dustin Boyd and Roman Starchenko made the final score 5-2.

Vityaz claimed an overtime win after a lively 4-4 tie against Admiral. Georgy Berdyukov got the decisive marker 40 seconds into the extras but it was Dmitry Shitikov’s hat-trick that dominated the home scoring. Admiral shared the goals around, with Dmitry Sayustov getting the 4-4 goal midway through the third period.