Few would have picked Torpedo as a likely high flier this season, but after an opening game win over Lokomotiv the team from Nizhny further embossed its credentials with a shock success away to SKA.

The damage was done in the first period: Daniil Ilin put Torpedo up in the 5th minute and even though Vadim Shipchyov tied the scores on a power play shortly after Torpedo looked the likelier candidate. Alexei Pepelyayev scored a power play goal for the visitor to make it 2-1 going into the first interval, and the gauntlet was thrown to SKA.

The home side tried to rally, but found goalie Ilya Proskuryakov in fine form on his way to 29 saves on the night. A scoreless second stanza left the host frustrated before Carl Klingberg made it 3-1 with his second goal of the season. That was the end of SKA’s hopes of salvaging something from the game and after three outings this season the Petersburg team has a disappointing four-point return.

Two goals in the final 10 minutes lifted Loko past Ak Bars and condemned the Kazan team to a second defeat in three games.

There wasn’t much to choose between the teams early on, despite Ak Bars losing captain Alexander Svitov on a 5+20 tripping penalty midway through the first period. The teams traded goals in the middle session with Yegor Averin putting Loko up before Fyodor Malykhin tied it up.

But with the game in the balance, Loko’s blue line stepped up. Ilya Gorokhov broke the deadlock in the 51st minute and Patrik Hersley scored from the point on a power play three minutes later to settle the outcome. 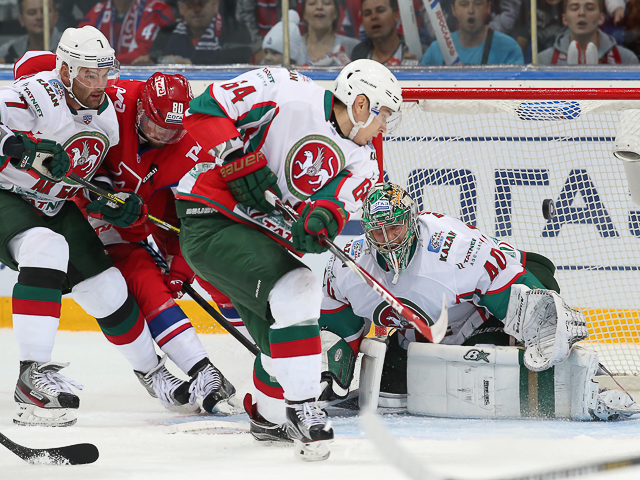 Latvian goalie Edgars Masalskis made 44 saves to help his team to victory in the capital. He was at his best in the third period, stopping 18 shots as Spartak chased the game hard, but in vain.

The road to victory was paved by the Streltsov brothers: Alexander opened the scoring in the first period off an assist from Vasily before returning the favor for the 2-0 goal in the middle session. Filipp Toluzakov found a way past Masalskis in the 39th minute, but Alexander Bumagin reinstated that two-goal lead as Lada claimed the points. 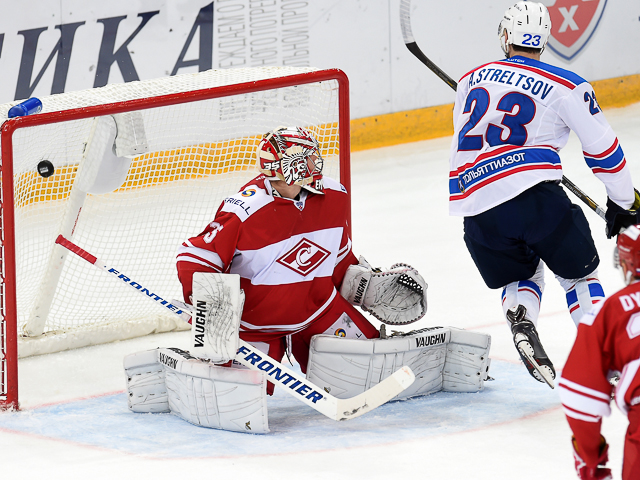 Jokerit makes it three from three

Goalie Henrik Karlsson was the star as Jokerit maintained its 100% start to the season with a big win over CSKA. Karlsson made 36 saves for his shut-out, blunting the Army Men’s fearsome offense with a dazzling display between the piping.

At the other end Viktor Fasth came in for his KHL debut after arriving at CSKA over the summer, but he had a disappointing evening. After a scoreless first period the Swede found himself on the wrong end of a roughing call early in the second and that penalty handed Jokerit a 5-on-3 power play. The Finns took full advantage: Pekka Jormakka and Mathis Olimb opened up a 2-0 advantage in the 25th minute.

That wasn’t the end of the contest: CSKA kept Karlsson busy for the rest of the evening but Jere Sallinen’s goal early in the third stretched the home advantage. A first defeat of the season for CSKA; Jokerit goes marching on.