A dramatic finish saw Spartak claim victory on its return to KHL action. Casey Wellman’s over time effort snapped a 3-3 tie, but earlier Igor Radulov was the hero for the Red-and-Whites as he tied the game with just two minutes to play.

Earlier in the game Spartak had twice led through Maxim Potapov, but with a little over three minutes left Matt Ellison stunned the crowd at Moscow’s Luzhniki Arena by putting Dinamo ahead for the first time.

However, most of the 7,800 fans in Spartak’s new home went home happy thanks to Alexander Mereskin’s work on the slot to tee up Radulov’s equalizer and Wellman’s lightning break down the left to snatch the winner.

Special teams too strong for Salavat

Avangard’s power play clicked into gear to turn around an early deficit and get Evgeny Kornoukhov off to a winning start as he takes on responsibility for the senior team in Omsk.

In a clash between two teams with high hopes of bossing the Eastern Conference, Salavat Yulaev took the early initiative and went ahead in the first period when Denis Khlystov fired home. But when the visitor’s Sergei Soin ran into penalty trouble in the middle stanza Avangard hit back. Sergei Shirokov tied the game before new signing Jonas Ahnelov made it 2-1 just 50 seconds later with Soin again in the sin bin. Salavat’s cause was not helped by influential D-man Kirill Koltsov sitting out a misconduct penalty from late in the first period.

Koltsov’s return to the game could not save his team, though. Alexander Perezhogin picked up on a defensive error to beat Niklas Svedberg in a one-on-one and make it 3-1 for Avangard.

The third period saw Ufa newboys Linus Omark and Sami Lepisto combine for a power play goal to cut the deficit but it was to no avail. Avangard sealed the points with a quick turnover in center ice and a short-handed marker from Alexander Popov to complete the scoring.

Latvians serve up a shock for Ak Bars

Last season’s Gagarin Cup runner-up, Ak Bars, went down to a surprise defeat at Dinamo Riga in its opening game.

Dinamo took the game to its visitor from the off, seizing the initiative in the first period but failing to convert that advantage into goals. But a short-handed goal from Kaspars Saulietis midway through the second got the home team on the board before Alexander Svitov tied it up before the second intermission.

Ak Bars had shown signs of taking control of the game as the middle session wore on, but it was Dinamo who delivered the knock-out blows in the third. Miks Indrasis made it 2-1 in the 45th minute before Gunars Skvorcovs made the points safe five minutes later.

Lokomotiv had goals from two new signings but still suffered a shoot-out defeat away to Torpedo. Patrik Hersley and Denis Mosalyov found the net for Loko but Torpedo debutant Carl Klingberg and Alexei Potapov ensured it was 2-2 after 60 minutes. The shoot-out was settled by Alexander Frolov to give Torpedo the win. 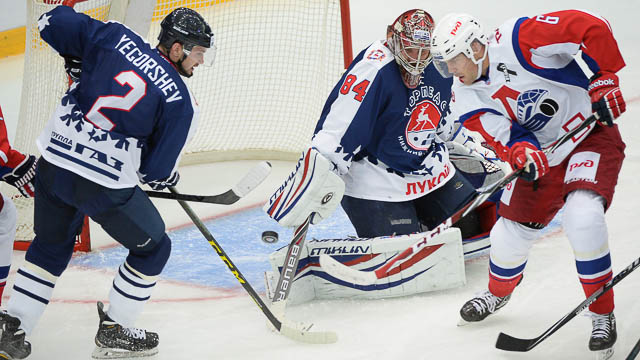 Wojtek Wolski marked his Metallurg Magnitogorsk debut with a game-winning goal in Astana. He struck on 54:00 to complete his team’s recovery from 1-0 down against Barys. Earlier Konstantin Rudenko gave the Kazakhs a first-period lead but Wolski and fellow new signing Tomas Filippi combined to set up Chris Lee for an equalizer early in the third.

In Helsinki, Jokerit edged Severstal 3-2 in a game where both teams showed signs of rust after the summer break. The first period was goalless but Yury Trubachyov put Severstal up on the power play seconds after the restart. Philip Larsen quickly cancelled that out and Ville Lajunen converted a Juhamatti Aaltonen pass to make it 2-1 shortly afterwards. Tomi Maki gave Jokerit some breathing space in the third; Evgeny Kovyrshin’s late goal could not save Severstal.

HC Sochi made a winning start at home to Lada. Nikolai Zherdev put the Black Sea team on its way midway through the second period before Andre Petersson and Mikhail Anisin stretched the lead in the third. Pyotr Schastlivy’s empty-netter wrapped up a 4-2 win.