All change at Amur

19 August 2015, 11:32 News
It’s been a long time since fans in Khabarovsk had much to shout about: since the 2011 season, when Hannu Jortikka took Amur to its one and only KHL play-off campaign, the Far Eastern club has been as remote from glory as it has from most of its opponents. But a summer of big changes could be about to tilt the balance of power between the league’s farthest-flung clubs as a crop of players makes the short journey from Admiral Vladivostok to strengthen Amur’s prospects in the coming campaign.

The story started after the end of last season. Neither Admiral nor Amur made the play-offs, but Admiral president Alexander Mogilny took up the offer of heading the Khabarovsk organization. That prompted a swathe of former Admiral players to move 500km inland from the Pacific port city as Amur rebuilt its roster under the guidance of new head coach Sergei Shepelev – arriving from, you guessed it, Admiral.

In total 10 players followed Mogilny and Shepelev, with some of them pointing to the change in management as a key factor in their decision. It added up to one of the biggest player exchanges in the league’s history, rivalled by the mass transfer of Spartak youth team players to SKA’s MHL outfit last summer as the Moscow team battled to raise the funds to stay in business.

But that wasn’t the end of the transfer business. One player who arrives without an Admiral connection is goalie Juha Metsola. He was signed from Tappara Tampere in Finland, where he was rated the top goalie in the national championship last season. With a GAA of 1.91 and a save percentage of 93.6%, the 26-year-old appears to have the makings of another member of the famous Finnish goaltending dynasty.

There’s also an interesting new acquisition from the Czech Republic. Forward Tomas Zogorna, 27, has been on the fringes of the Czech national team in recent seasons, making 18 appearances in total. He had a productive year with Pardubice last time out, plundering 38 points in 51 games.

The early indications have been positive, with Amur punching above its weight in pre-season. A 2-1 win at Dynamo Moscow in the Chernyshev Memorial tournament was a notable scalp and it left defenseman Jan Kolar, one of the former Admiral men, talking optimistically about giving his team the confidence to take on big-name opponents without fear. “It’s still early to draw any conclusions, it’s just pre-season, but it says a lot for our confidence that we are not losing games in regulation,” he told R-Sport. “There are a lot of familiar faces here, it’s a good group. I think the season will work out well for us.” 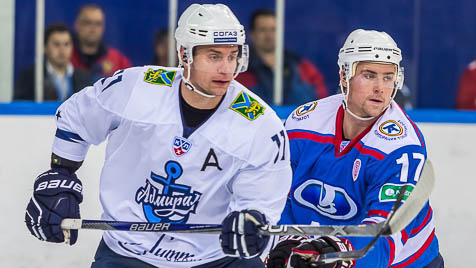 Admiral, meanwhile, faces an enforced rebuilding task of its own. The club, only two seasons old, won warm words from the departing Mogilny, with the president speaking of how the support in Vladivostok rivalled anything he had seen in his storied career. A trio of Amur forwards moved to the coast: Dmitry Lugin, Evgeny Orlov and Mikhail Fisenko (pictured, right, in white).

But two imports with KHL experience may have a bigger role to play. Oskars Bartulis, the Latvian international D-man, joins from Barys while former Medvescak forward Pascal Pelletier also arrives. The return of popular Swedish attacker Niklas Bergfors is also a key plank of Admiral offensive threat for the coming campaign.
#preview