18 August 2015, 14:59 News
Since returning to KHL action following the air tragedy in 2011, Lokomotiv has largely put its faith in foreign coaches. Tom Rowe, Dave King and – briefly – Sean Simpson have all had spells behind the bench with old-stager Pyotr Vorobyov putting in a stint between Rowe’s departure and King’s rescue act in 2014. That’s in keeping with the club’s 21st-century history: since Vladimir Vuitek took the reins in 2001, locals have been the exception rather than the rule.

This time, though, it’s a new approach. Alexei Kudashov is the man calling the shots. Young, Russian, eager to emboss his coaching credentials after spending two years in his first head coach role at Atlant, it’s an appointment that hints at a new direction for a club that has waited too long for a serious tilt at top honors.

For Kudashov, who spent three seasons in Yaroslavl in a well-traveled playing career that saw him finish up winning a Gagarin Cup under Oleg Znarok at Dynamo Moscow, it’s a very new challenge. With Atlant’s recent financial problems his role there was often more about fire-fighting that competing at the top; at Loko he’ll be expected to match the merits of the powerhouses that dominate the Western Conference.

But Kudashov is clear that he doesn’t want anyone hiding behind the departure of all that talent and experience. “I’d rather we had a team with no passengers, a team where everyone is a ‘driver’, a leader,” he told Sport76.ru. “Of course we already have a few players who have natural leadership qualities and will take that role for themselves. But we’re hoping that every player will step up and take his chance to lead from the front.” 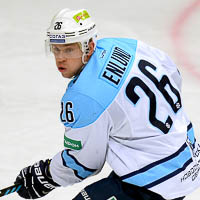 The club’s recruitment also bring in some players with strong KHL experience. Patrick Hersley, the Swedish defenseman who was a surprise star last season with Sibir, is a natural replacement for the departed Yakovlev. His Sibir team-mate Jonas Enlund (right) also makes the move to the Volga city. The forward has been somewhat underrated in his time in Novosibirsk, outshone by the likes of Jori Lehtera and Jarno Koskiranta, but his stats of 191 points in 297 KHL games point to a reliable and consistent producer.

Kudashov has also opened up his contacts book to bring Denis Mosalyov from Dynamo. The forward played with him at HC MVD and in Moscow, and might now blossom in a new environment after becoming an increasingly streaky scorer for a Blue-and-White roster that sometimes seemed in danger of stagnating last season.

Pre-season results for Loko have been somewhat mixed – an inevitable consequence of swapping so many influential faces. In Nizhny Novgorod the team proved obdurate, but managed just two wins from five games, with two more overtime defeats pushing it down the tournament table. A 3-1 win over Ak Bars at the start of the Latvian Railways Cup in Riga gives greater grounds for encouragement as preparations for the season continue.
#preview