17 August 2015, 15:15 SDC
Metallurg Magnitogorsk’s pre-season campaign steps up a notch this weekend as it hosts the Ivan Romazan Memorial trophy and looks to stretch its winning run to five years in this contest. But ahead of the competition there was surprise news from the Southern Urals, with head coach Mike Keenan talking about trying to get Russian citizenship.

Keenan, a Canadian national, is about to start his third season behind the bench in the steel city and has already got a Gagarin Cup triumph on his resume to go alongside his Stanley Cup victory in the 1990s. And he’s clearly more than happy to continue his association with Metallurg – and Russia as a whole.

“Right now we’re sitting down with the management to explore all possible ways of getting Russian citizenship,” Keenan told journalists after his team’s final training session ahead of the Romazan tournament. “I live in Russia, I enjoy working with Russian players, I like the culture here, people are friendly and respectful. And they really love their hockey! I be only too happy if we can work something out.” 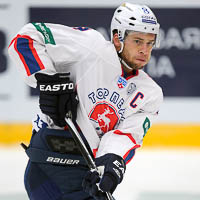 On the ice, Magnitka will once again look to its deadly first line of Sergei Mozyakin, Jan Kovar and Danis Zaripov to provide the firepower. The latter two have recently signed extended contracts, suggesting there will be little respite for KHL goalies in the coming season. But on the other lines things are changing. Wojtek Wolski (right), a reliable scorer for Torpedo in recent years with 43 points from 52 games last time, is heading to Magnitka, replacing Traktor-bound Maxim Yakutsenya.

There’s also a new import, Czech forward Tomas Filippi. He arrives from Bili Tygri Liberec where he’s been forging a reputation as one of the hottest shots in the ExtraLiga with 40 points in 52 games last time out. But Keenan warns that the 23-year-old still has a way to go before he can match the return of his compatriot Kovar. “He’s settling in OK but the KHL is a much higher level than the Czech competition,” Keenan told Sport Express. “It’s a step up for him but he’ll need to work hard before he can be one of the best players in this league.”

Like many KHL teams, Metallurg has suffered the loss of young talent heading across the Atlantic. This time it’s 18-year-old Vladislav Kamenev who is going west, signing a three-year deal with Nashville Predators. Kamenev was a regular last season, although his 10-point return from 41 games reflects his relatively limited ice time in Magnitogorsk. It was still enough to persuade the Predators to take up the player they drafted in 2014.

At the other end of the scale, Tim Brent is also looking to return to the NHL while US international Tim Stapleton is off to Biel in Switzerland. However, there has been no flood of new arrivals: aside from Wolski and Filippi, Magnitka has added a couple of new faces from SHL runner-up Izhstal Izhevsk as Keenan looks to fine tune an already reliable roster rather than go for a complete overhaul.
#preview