15 August 2015, 12:41 News
The coming season brings new excitement in Astana where Barys finally moves into its long-awaited new home. The Kazakh team has long been accustomed to the cramped surroundings of a 4,000-seater venue but will now have space to welcome up to 12,000 supporters to an impressive modern arena.

The grand opening, carried out by President Nursultan Nazabayev, coincided with this week’s President’s Cup – giving Kazakhstan’s hockey faithful a chance to check out the new venue and the efforts of incoming head coach Yerlan Sagymbayev. The initial signs are good: Barys lifted the cup thanks to an overtime win against Admiral in the final. A quick look at the scorers in that competition turns up familiar names aplenty – the old axis of Brandon Bochenski, Nigel Dawesand Dustin Boyd is tuning up nicely for the coming campaign, while stalwart D-man Kevin Dallman is also back among the points.

Indeed, familiarity and continuity are the keywords as Barys prepares for the 2015-16 season. Sagymbayev may be new to the hot seat, but he’s been around the organization for some time. He spent two seasons as assistant coach of the senior team before stepping sideways to perform a similar role with the MHL roster last season. As a legendary figure in Kazakh hockey, a graduate of the Ust-Kaminogorsk school who went on to an Olympic Quarter-Final in Nagano in 1998, he’s up to speed with the needs and expectations of the nation’s flagship team. And he’s also working to build on a roster that has steadily improved in recent seasons.

After starting its KHL life as a team destined to battle for a play-off spot and then bow out quietly, the past two campaigns have seen Barys emerge as a strong contender in the East. The prospect of upsetting the likes of Ak Bars, Magnitka or Salavat Yulaev to reach a grand final may appear remote, but it’s no longer the impossible dream it seemed a few years ago. It’s evolution rather than revolution, though, with only a handful of changes.

The key arrival is Canadian defenseman Keaton Ellerby. He comes with more than 200 NHL appearances where he’s been putting his imposing physique to good use in his own zone. Very much a ‘stay at home’ blue-liner, he could be the ideal complement to the marauding Dallman, but his challenge will be to adapt to the bigger European-sized ice. 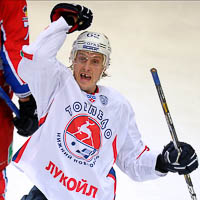 Another newcomer, Vadim Krasnoslobodtsev (right), needs little introduction. The Kazakh international is back home after a stint with Torpedo and, as a recognized star for club and country, will be warmly welcomed by Barys fans. The other new face, Evgeny Rymarov, steps up from the SHL after spending most of last season with Sariyaka and Kazzinc-Torpedo.

The departure board is also modest. Veteran goalie Vitaly Yeremeyev has hung up his skates and Latvian defenseman Oscars Bartulis moves to Admiral but it’s largely the same personnel that Andrei Nazarov led last season.

As for the new arena, the early indications are also encouraging. Reports suggest that it offers all the facilities of a top-class venue and should become an attractive home for Barys and Kazakhstan’s national team. Part of the KHL’s long-term program is based around improving hockey facilities throughout its member nations, and this new venue makes a valuable contribution towards that aim.
#preview