4 August 2015, 12:28 News
After two seasons in the KHL – one successful, one less so – Medvescak Zagreb is changing its approach slightly for the coming campaign. The Croatians, for the first time, have recruited directly from the Russian market rather than relying on European and North American talent.

It’s something of a surprise, and makes the Balkan bears unusual among the league’s international contingent: while Dinamo Riga, Slovan and Jokerit tend to opt against signing Russian players, Medvescak is actively scouting for talents that might have been missed by their rivals. Three forwards have come, two of them from the KHL: Ilya Arkalov and Sergei Tverdokhlebov arrive from Avtomobilist and Amur respectively, although neither had much game time last season. Joining them is an SHL prospect, forward Artyom Pugolovkin from Dizel.

For a club that has always had North American coaching and often a strong Trans-Atlantic accent this is something of a departure, but president Damir Gojanovic explained that it was a sensible step for the organization. “We are looking for players who will benefit our club and suit our budget, of course, but we also hope we can attract Russian players who want to gain experience of playing in a club that deliberately follows a North American style,” Gojanovic told Sport Express.

He added that after last season’s disappointments – Medvescak seldom looked like a play-off contender and by the end of the campaign had just 16 players suited up – a change of approach was needed. “We wanted something new and interesting for our fans, to give them a young, international team,” Gojanovic added. “Inviting these Russian players fits well with that idea.” 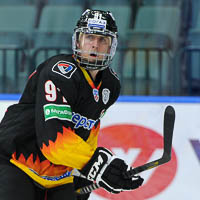 With a playing budget of around $5 million, the team will not be signing star names like Jonathan Cheechoo – a key man in Medvescak’s first KHL campaign. But the money has stretched to signing Gagarin Cup winner Marek Kvapil (right) from Severstal, while Radek Smolenak and Jesse Saarinen arrive from the Finnish league.

Kvapil was part of Dynamo Moscow’s championship roster in 2012 and 2013, but found things harder in Cherepovets last season, while Smolenak has some KHL experience from short stints at Ugra and Torpedo. Saarinen, 30, makes his first appearance in the KHL after many years playing in his native Finland.

Incoming head coach Gordie Dwyer, a young specialist with a burgeoning reputation back home, the task is to spring a surprise or two and get Medvescak back into the play-off picture in defiance of those who consider the team to be also-rans. “It will be difficult to get to the play-offs but we showed in our first season that we can do it,” Gojanovic said. “Last time the team was never close knit, we never saw would it could really do. But it’s sad that people think we have nothing to offer. I think our club brings a lot to the KHL and interests not just our fans but all lovers of the game.”
#preview