3 August 2015, 12:10 News
Last season’s debutant, Jokerit Helsinki, proved to be a power in the Western Conference. The engine room of Errka Westerlund’s team, the prolific LoKoMo combination of Linus Omark, Petr Koukal and Steve Moses, has moved on but the Finns are looking to a new batch of prospects to replace them.

Top of the list is Norwegian star Mathis Olimb. He arrives from Frolunda replete with extensive international experience and a successful campaign in the Champions Hockey League, where he was the leading scorer. His game is reminiscent of Omark’s and he is clearly intended as a straight swap for the Ufa-bound Swedish forward.

Moses, the KHL’s top goalscorer last season with a 36-goal haul that set a new tournament record, will be harder to replace. The American is heading back home to try his luck with Nashville Predators in the NHL, seizing a chance that seemed to have passed him by when he headed to Europe after struggling to land a contract at the top level due to his relatively small size.

Brandon Kozun, his replacement, has a similar history. Unable to break into the Maple Leafs roster he arrives with a good AHL track record. Even his physique is almost the same Moses’: give or take a couple of centimeters they could almost fit into the same uniform.

Petr Koukal, perhaps surprisingly, has swapped Helsinki for Avtomobilist Yekaterinburg. That’s quite a coup for Ural club, but opens the way for Jokerit to bring in an experienced NHL center in the shape of Peter Regin. With almost 250 appearances with the Senators and the Islanders, the Dane looks set to be centering for Olimb and Kozun. He’s part of a Danish contingent that also includes defensemen Philip Larsen (ex Ugra) and Jesper Jensen. 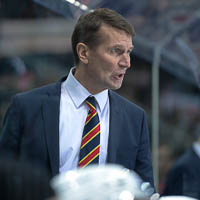 Another big advantage for Jokerit is the guidance of Westerlund behind the bench. Anyone with even a passing acquaintance with Finnish hockey will be well aware of how his teams operate: strict tactical schemes, clearly defined roles for every man on the roster and a set up that makes it easy to slot players in and out as needed. It’s something that served the Finnish national team well in the past, with rookies fitting seamlessly into the squad and continuing to deliver that characteristic Suomi style; now the challenge is to make the same smooth transplants into a club team.

GM Jari Kurri has every confidence that this will happen. He told Sport Express that he expects this team to improve on last year’s run to the second round of the play-offs (the Finns lost out to CSKA after defeating Dinamo Minsk in the first phase). “I’m entirely happy with what we’ve done in the close season,” Kurri said. “I’m sure we’ve found worthy replacements for the guys who left and maybe we will be even better this year. It’s not just a question of statistics: each new player fully meets our wishes and requirements. It’s not just about finding someone who can score 36 goals – it might be a long time before anyone does that again – but our training staff will find the way to unlock the vast potential in each of our players.”

Jokerit face a tough battle in the Western Conference against powerful rosters from SKA, CSKA and Dynamo Moscow. But as last season showed, the Finns have every reason to believe they can compete effectively once again.
#preview