2 August 2015, 11:16 News
Charismatic Czech coach Milos Riha has been one of the most recognizable figures in the KHL since day one. Now he’s back in the competition with Slovan Bratislava and faces the task of improving on last season’s disappointing campaign in Slovakia.

Everyone knows that Slovakia loves its hockey, and that games in Bratislava are played in front of big crowds at the Slovnaft Arena. So last season, with Slovan off the pace throughout and never really looking capable of even reaching the play-offs was a huge disappointment in this puck-crazy town. A change of approach was called for. Out goes Petri Matikainen and in comes Riha.

The foghorn-voiced Czech has a reputation for getting teams to exceed their potential, thanks to a history that started with producing some of the strongest Spartak teams of recent years and was burnished by Atlant’s unlikely run to the Gagarin Cup final in 2011. His forceful personality has also kept him in the headlines, whether bawling out officials or arguing with the club’s management – something that may have contributed to his dismissal from SKA St. Petersburg the day after he led them to the top of the championship table in 2013. 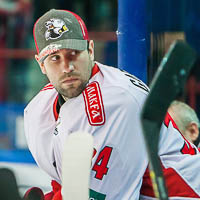 Riha also has history in Bratislava. This will be his third stint behind the bench at Slovan and his previous two seasons in charge both ended in Slovak Extraliga championship success. It may be hard to complete a golden hat-trick in the KHL, but there’s every reason to hope things will be better for the club in the coming campaign.

One area that needs improvement is defense. Last time around Slovan gave every impression of a soft underbelly and suffered five-goal shellackings (or worse) on six occasions. The low point came in Moscow in February when CSKA racked up a KHL record 12-0 victory on the Slovaks and there were home and away thrashings against SKA as well as heavy defeats at Dynamo Moscow, Dinamo Riga and Barys.

So the goaltending team has changed: in comes Michael Garnett (right) from Traktor, a player with a wealth of KHL experience and two runs to the Gagarin Cup final on his resume. He’s joined by Barry Brust, who burst on to the scene with an eye-catching, if somewhat unpredictable, debut season at Medvescak before finishing the 2014-15 campaign with Ugra. A strong crop of goalies is something of a Riha trademark – far from having an established #1 and a back-up he likes competition for the starting spot. As he points out, when he took Atlant to the final, Konstantin Barulin and Vitaly Koval, two established internationals, vied for position on the crease. 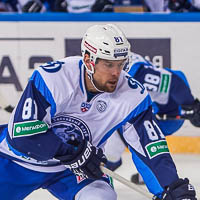 Defenseman Ivan Svarny (left) has also joined from Dinamo Minsk, along with Slovak international forward Marek Viedensky from HPK in Finland. But Riha hasn’t opted for root-and-branch surgery on his roster, looking instead to build on the potential that saw last season’s team produce some good results among those shockers.

Pre-season results have been encouraging, with a couple of victories over Salavat Yulaev giving grounds for optimism. More of that will be vital if Riha is to deliver on the promise he made in an interview with Sport Express after his appointment. “Wherever I been coaching my teams have always played in front of full arenas,” he said. “It’s what I’m used to and it helps us to achieve our aims. My teams never fail to play attractive hockey.

“I don’t want to predict our final position, whether we’ll get into the play-offs or whether we’ll win our division. Slovan has already played three seasons in the KHL and so far it hasn’t achieved very much. We need to work hard and do everything possible to succeed. If everyone within the organization is on the same page, from the management to the players, we can achieve a great deal.”
#preview