28 July 2015, 12:53 News
A year ago Sibir was celebrating the end of its most successful season ever – and anxiously looking forward to a future without several star names. Twelve months on, and it’s the same old story in Novosibirsk: after reaching the Eastern Conference final, the club has once again seen plenty of transfer activity with several big names moving on.

For an organization with a relatively modest budget compared with the KHL’s biggest hitters, success can sometimes seem like a double-edged sword. If a player performs strongly here, he inevitably attracts covetous glances from wealthier rivals, making it hard to hold on to the best. The departures this summer include three big contributors from Europe. 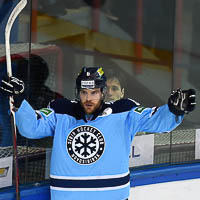 Sweden’s Patrick Hersley (right) arrived a year ago and surprised everyone by turning into one of the league’s most productive D-men. He posted 33 points in 56 regular season games and chipped in another 3+6 in 12 post-season outings. Those numbers earned him a switch to Lokomotiv Yaroslavl, where he’ll be joined by forward Jonas Enlund. Enlund, a Finn, has been a reliable forward for five seasons, with 191 points from 297 games with Sibir. Another flying Finn, Jarno Koskiranta, is also heading west after becoming SKA’s big summer signing, while the team’s leading point scorer Dmitry Kugryshev joins defenseman Igor Ozhigannov in returning to CSKA.

If that leaves a large hole in Andrei Skabelka’s roster, it also opens up opportunities for the team to unearth some new stars for the coming campaign. And this time the club can continue with Skabelka behind the bench; a year ago it was recruiting him as a replacement for CSKA-bound Dmitry Kvartalnov. 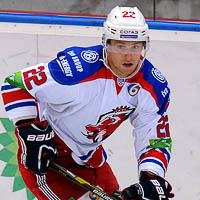 In recent seasons Sibir’s GM Kirill Fastovsky has earned a reputation as a shrewd dealer. This year he’s once again assembled a collection of players with clear potential … and perhaps something to prove. The most familiar name might be Calle Ridderwall (left), a Swedish forward who helped Lev Prague to the Gagarin Cup final two seasons back. He arrives after a season in Sweden with HV-71 and said that he was partly persuaded by his compatriot David Ullstrom, another former Lev player who switched to Sibir when the Czech team folded in the summer of 2014.

There are also two CSKA players making the move. Young forward Damir Zhafyarov, a graduate from the Metallurg Novokuznetsk hockey school, returns to Siberia after a season in Moscow. He is accompanied by experienced defenseman Georgy Misharin, a reliable figure with a wealth of game time in Moscow and Magnitogorsk. Another former Magnitka player, Rinat Ibragimov, is also heading east. He was part of the Gagarin Cup-winning roster of 2014 but had less game time last season.

However, in common with several clubs, Sibir are finding it harder than usual to navigate the international transfer market. Fastovsky admitted in an interview with championat.com that the team still needed a center, and hoped to use their fifth and final import in that role. “But things aren’t working out quite as we’d like and the market is pretty limited,” the GM said. “There aren’t so many options and we’re looking at players from any country. We made a few offers to players and we’re waiting to hear from them.”
#preview