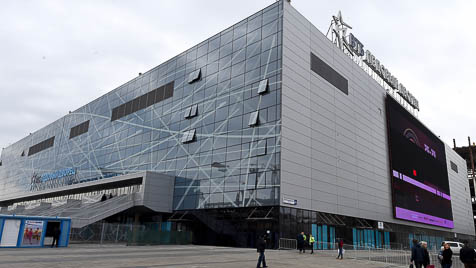 The KHL already boasts a clutch of Europe’s finest arenas – its teams play in Olympic Sochi and at World Championship host stadiums in St. Petersburg, Riga, Helsinki, Minsk and Bratislava, while the resurgence of Russian hockey in the 21st century has seen impressive modern facilities spring up along the shores of the Volga and into the depths of Siberia.

But the latest addition to this collection, the VTB Ice Palace in Moscow, already promises to be something special. The purpose-built 12,000-seater arena may not be the biggest in the league but some are already describing Dynamo Moscow’s new home as the best in Europe.

The new facility, a convenient 10-minute walk from Avtozavodskaya metro station, had a ‘soft opening’ back in April at the Legend’s Cup – a fitting event for an arena that forms the centerpiece of Russia’s new hockey Mecca – and earned a positive appraisal from legendary Dynamo goalie Vladimir Myshkin. He told reporters from ITAR-TASS that it was set to outstrip Stockholm’s Globe and Helsinki’s Hartwall Arena and herald a new generation of hockey facilities.

“The arena is shaping up to be the best hockey facility in Europe,” he told ITAR-TASS. “It’s not all ready yet, but nowhere else has three ice sheets under one roof, with two of them multifunctional. Our arena is a few steps ahead of what we’ve seen elsewhere. That’s normal, time doesn’t stand still and in a few years there will be new, even more modern arenas.”

Those three ice sheets are a big attraction for Dynamo: the club can base itself here for everything from top-flight KHL action to the youngest junior practice sessions. Myshkin was also impressed with the quality of the ice he played on during April’s veterans’ tournament and the lay-out of the spectator seating.

For fans the arena is a big contrast from the historic venues at Luzhniki, Leningradsky Prospekt and Sokolniki that have so long been at the heart of the Moscow hockey experience. While old-timers may lament the loss of that palpable sense of sporting heritage, the VTB Ice Palace offers a truly contemporary experience: from the video screens and lighting to the spacious concourse areas. And soon the complex will have an extra attraction for hockey lovers when the Russian Hockey Hall of Fame opens its doors later this year. 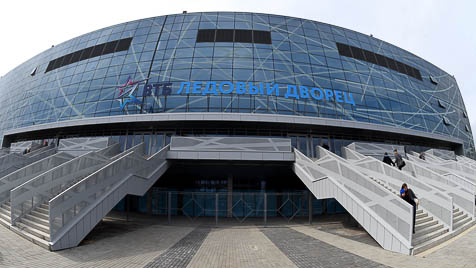 The museum, currently under construction next to the main arena, will tell the story of Russian and the Soviet Union’s rise to become one of the top hockey powers – starting from the first official game, played in December 1946 when Dynamo beat Vodnik Arkhangelsk in the inaugural encounter of the Soviet Championship and following a trail of Olympic and World Championship glory right up to the present day. It will also immortalize the deeds of the players, coaches and visionaries who made it all happen: 146 people were inducted into Russia’s Hall of Fame during the Sochi Olympics and more names are set to be added to the list as new generations of hockey legends write their own pages of the sport’s great history.

The VTB Ice Palace will stage its first games in pre-season when it hosts two tournaments. The doors open on August 6-9 for the Arkady Chernyshev Tournament, which features Dynamo, Spartak, Amur and Dinamo Minsk. The following week the venue stages the Mayor of Moscow Cup before the KHL season gets underway in late August. The new arena will make its international debut in December at the Channel 1 Cup when Russia, Finland, Sweden and the Czech Republic do battle in a dress rehearsal for the biggest international contest of the season – the 2016 IIHF World Championship.