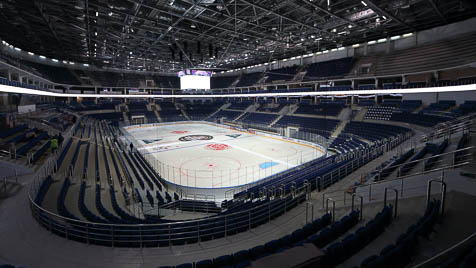 Dynamo Moscow has officially informed the Kontinental Hockey League of its intention to stage its home games in the 2015-16 KHL Championship at Moscow’s new arena, the VTB Ice Palace. The state-of-the-art stadium will undergo an inspection in the very near future to confirm that it meets all the requirements set down for participation in the KHL, after which the famous Blue-and-Whites can face their opponents on the ice of the League’s most modern arena, cheered on by an army of 12,000 fans in the stands.

For the KHL, the addition of another new and spacious venue creates the prospect of another record-breaking season for attendance at matches. Last season’s average audience reached a new height, breaking the 6,500 barrier, and the opening of the VTB Ice Palace is a significant step toward surpassing that figure. Naturally, hockey fans must trust Dynamo’s players to keep playing the kind of hockey that is sure to leave very few empty seats in the club’s impressive new home.

Finally, an important reminder for any fans fortunate enough to find themselves in the Russian capital from the 6th to the 9th of August. You can treat yourself to an early taste of the atmosphere at the VTB Ice Palace when the arena hosts the new Arkady Chernyshev preseason tournament, contested by Dynamo Moscow, Dinamo Minsk, Spartak and Amur.