Alexander Radulov: Everyone at CSKA is a Winner 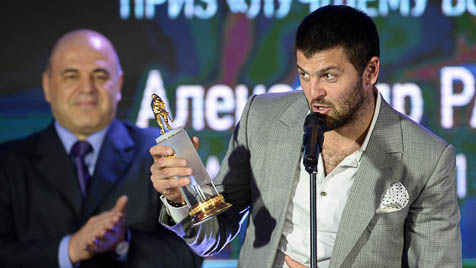 If the star of last season closing ceremony was Magnitka’s prolific marksman, Sergei Mozyakin, then this year it was Alexander Radulov’s turn to hog the limelight, such was the frequency with which the CSKA attacker was called to the stage to collect yet another prize. He must now find space in his trophy cabinet for a hatful of awards, including those for the season’s MVP, the top scorer, and of course, as one of the All-Star team of the year.

The popular forward was in a relaxed and jovial mood all evening, and was more than willing to joke and chat with the assembled journalists. “I flew here just to attend this event, and I brought my parents with me. I also invited my girlfriend, but sadly, she couldn’t make it," Alexander said. “This ceremony is very important to me because all of the prizes I won are also accolades for our team, coaches, fans and the club management. I’m very glad that we enticed the supporters back to the stadium - there was barely an empty seat in the ice palace all season. I know we couldn’t give them the Gagarin Cup, but they could see that we battled hard in every game. It's great to receive so many prizes at this ceremony, but for me the results of the team always come first. Without my team-mates I would have won nothing.”

How do you feel at the end of such a long campaign?
“It’s been a good season. It’s a long time since CSKA performed so well, although we still should have done a little better: we got so close to reaching the final series and we didn’t quite make it, but that’s life. You have to learn the right lessons. The main thing is that we have a young team, so we can only get better. The coaches have done a great job, and next year, I’m sure, they’ll be even more determined and they’ll lead us to victory.”

If you were asked to choose the season’s most valuable player, who would get the prize?
“The whole CSKA team. Igor Grigorenko, Stéphane Da Costa, Roman Lyubimov… they put everything into their game. Not everything went perfectly, but the guys had a terrific season. The entire team will get together on the 24th of May, and I’ll be sure to thank all of them again. It’s a privilege to have been on the ice with them.”

Did you watch the World Championships?
“Not every game, but I have to say the Canadians deserved their victory. They have so many quality players. We need to work hard to ensure that our hockey evolves to that level. We don’t need to invent anything new; everything is already in place.”

Were you very upset that injury prevented you from helping Team Russia in the Czech Republic?
“It's sport, so it happens from time to time. I’m not a rookie anymore, so I understand that you should only travel somewhere to play if you are fully fit. I really felt for the guys, but you only have one body, so you have to look after it and ensure you’re in good shape for the next season.”

As it’s now the midseason, many are asking if you’ve proposed to your girlfriend.
“Yes. I proposed. That’s all. I’ll say no more, in case any journalists turn the words into something else.”

Were you nervous?
“Of course I was, I am human, I kept asking my older comrades about the best and most proper ways to do it, but it all went well.”
Share
Прямая ссылка на материал