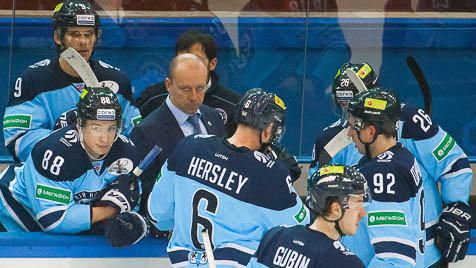 The rise of Sibir was irresistible: the Novosibirsk team was expected to struggle after head coach Dmitry Kvartalnov left for CSKA in the summer, while Finnish star Jori Lehtera headed to the NHL. But under the guidance of Andrei Skabelka, who had previous served as #2 at Torpedo, the team quietly outstripped the traditional Eastern Conference leaders Avangard, Salavat Yulaev and Metallurg Magnitogorsk. By January it had moved into second place in the conference, hard on the heels of leader Ak Bars, with Swedish D-man Patrick Hersley attracting plenty of pundits for the quality of his contributions.

The team’s progress was noted, with Skabelka being invited to join Metallurg’s Mike Keenan behind the bench for Team East at the All Star Game in Sochi. He helped to earn a fourth win for his team in five meetings between East and West in an entertaining encounter that equalled the record for the number of goals scored as the East took an 18-16 verdict. Sergei Mozyakin led the scoring with six goals. Atlant’s Matt Gilroy became the first player to deliver a perfect performance in the shooting accuracy test while Wojtek Wolski set a new speed record, shaving 0.3 second off Milan Bartovic’s best. Dynamo defenseman Andrei Mironov raised the biggest smile of the evening, attempting a penalty shot from a supermarket trolley pushed by his clubmate Alexander Yeryomenko.

Back in the KHL, Salavat Yulaev’s defenseman Kirill Koltsov managed a huge achievement in his team’s game against Avangard on Jan. 21. His goal took his career points tally to 376, making him the most prolific defenseman in Soviet and Russian hockey history and beating Vyacheslav Fetisov’s record. 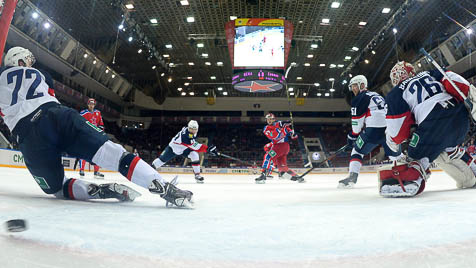 CSKA continued its record-breaking form with a 12-0 crushing of Slovan on Feb. 12. The margin of victory outstripped Ak Bars’ 11-1 thrashing of Avangard in 2009 to become the biggest ever win in the KHL. Alexander Radulov scored 3+2 on the night, with his strike partner Igor Grigorenko posting 3+1. Two days earlier the club had posted another KHL milestone – its 3-1 win over Metallurg Magnitogorsk was its 44th of the season, another league record.

CSKA went on to top the KHL’s regular season table and claim the mantle of Russian champion – the first time the club could boast of a national championship since 1990 and a welcome return to the honors board for the most titled organization in world hockey history.

The play-off battle saw newcomer HC Sochi sneak into eighth place in the West in its debut season, holding off a brave challenge from Atlant and Severstal. Jokerit also ensured its KHL bow would be extended, finishing fourth to set up a meeting with Dinamo Minsk. In the East Lada fell short of the top eight, with Avtomobilist edging out Admiral by a single point. 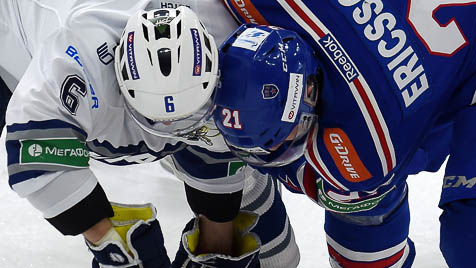 The first round of the play-offs went entirely according to the seeding, and only one series – the clash between Avangard and Barys – went to seven games. But there was still plenty of interest: Dynamo Moscow avenged last season’s shock exit to Lokomotiv, Jokerit sank Dinamo Minsk in five as the play-offs went to Finland for the first time and Sibir overcame Traktor in six games. Avotmobilist had modest cause for celebration: despite losing 4-1 to Ak Bars the Yekaterinburg team had its first ever post-season victory at this level.

Round two threw up a vintage battle between SKA and Dynamo Moscow. The teams had met twice before in the play-offs, and both times Dynamo prevailed on the way to lifting the Gagarin Cup. This time, though, SKA was much too strong. After sharing the first two games in St. Petersburg, the Army Men were unstoppable in Moscow. A gritty 2-0 win was followed immediately by a 6-1 cakewalk as an old score was settled at last. There was a revenge mission in the East as well, as Sibir beat Magnitka, ending Metallurg’s title defense and reversing the result from this stage last season. The stage was set for two grand showdowns as first faced second in each conference – CSKA vs SKA, and Ak Bars vs Sibir. 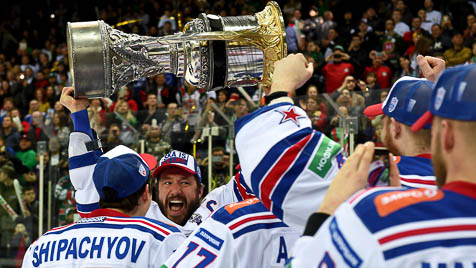 A year ago Sibir stunned Ak Bars in the first round of the play-offs, progressing for the first time in its history. But there would be no repeat here as inspired goaltending from Anders Nilsson saw Ak Bars to its third Gagarin Cup final with a 4-1 result. Nilsson was particularly impressive in the final two games, posting shut-outs as his team won 1-0 in overtime.

But there was even more drama in the West as SKA accepted mission impossible – and achieved it. No team had ever recovered from 0-3 in a play-off series until the inspirational form of Evgeny Dadonov, Vadim Shipachyov and Artemy Panarin clicked to turn the Western Conference final upside down. CSKA, for so long a team seemingly on the verge of play-off glory, was left with nothing at the penultimate hurdle; SKA was on track for its first ever major trophy.

The final pitted Vyacheslav Bykov against Zinetula Bilyaletdinov – two coaches with impressive CVs, including Gagarin Cup and World Championship success. It promised a clash of styles between Ak Bars’ cagey, defensive approach and SKA’s goal-grabbing exploits. It hinted at personal rivalries – Oscar Moller’s lethal marksmanship for Ak Bars had brought him six GWGs in post-season; Dadonov was on his way to a record-breaking 15-goal play-off haul.

The result was surprisingly one-sided: SKA powered to glory in just five games. It wasn’t all about flamboyant offense – Game 2 was a 1-0 win on an Anton Burdasov goal and Game 4 was settled by a Dadonov goal as SKA won 3-2. But the decider in Kazan showed how SKA’s attacking prowess could unsettle even the most experienced of defenses. Four goals in the first period put the game – and the series – out of reach as Ak Bars crumbled under the weight of expectation and the pace of SKA’s counter attacks. The game finished 6-1, with Ilya Kovalchuk claiming two, and SKA had its first major title in its 69-year history.