Legends of Hockey on KHL TV 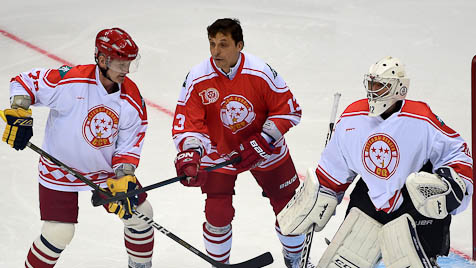 The Russian capital is preparing to celebrate the completion of a brand new sporting complex - the Park of Legends – which boasts an ultra-modern 12,000-seater hockey stadium, already christened the VTB Ice Palace. The arena already has a packed diary - it is soon to become the permanent home of Dynamo Moscow, will host the Channel One Cup in December of this year, and next year is to be a host venue for the IIHF World Championship.

However, the first skates to step onto the beautiful snow-white ice will belong to an illustrious collection of veterans of Russian hockey. The Legends Cup, running from the 26th to the 28th of April, has been chosen to be the first official hockey tournament played at the new, state-of-the-art venue. Competing for the big prize will be teams of legends from clubs with glorious histories in the sport: CSKA, Spartak and Dynamo from Moscow, as well as SKA Saint Petersburg, Ak Bars Kazan and Traktor Chelyabinsk.

This is the second Legends Cup in the tournament’s history, following on from the highly successful event in 2011 when the former stars of CSKA emerged victorious, so it was inevitable that the KHL TV Channel would be eager to cover this festival of hockey. On Monday, the 27th of April, viewers will be treated to three games in the tournament, and on Tuesday there will be broadcasts of the third place play-off followed by the Legends Cup final.

Vladimir Myshkin, Alexei Kasatonov, Vitaly Prokhorov, Sergei Fedorov, Valery Kamensky, Igor Boldin, Viktor Shalimov, Alexei Yashin – these are just some of the stars on display, so make sure you don't miss these classic battles between legends of hockey!