On Sunday, the 19th of April, the seventh season of the Kontinental Hockey League finally came to a close. Not only did the Championship end with a new winner, but throughout the previous eight-month rollercoaster ride of excitement and tension we witnessed many records smashed and several significant achievements for the whole League.

SKA Saint Petersburg became the fifth team to win the Gagarin Cup, joining Ak Bars Kazan and Dynamo Moscow, both of whom have won the trophy twice, plus Salavat Yulaev Ufa and Metallurg Magnitogorsk. The victorious Petersburg head coach, Vyacheslav Bykov, was also the man who led the Ufa men to glory in 2010-11, and thus becomes the first specialist to have tasted such a triumph with two different clubs. The Army Men from the banks of the River Neva played a record number of games for a single season (82) and their 274 goals brought them the Vsevolod Bobrov award for the Championship’s top-scoring team. This was also a record for the modern era, as only the legendary CSKA Moscow back in the Soviet era has scored more in a single season. SKA’s lethal sniper, Evgeny Dadonov, also wrote his name in the history books with a record 15 goals in the play-offs. 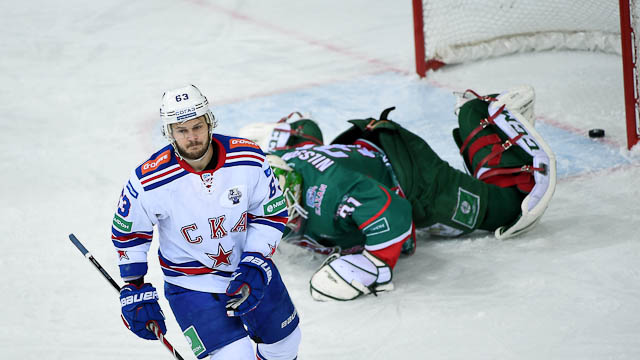 The VII Championship featured more games - 920 in all – than any of the previous six seasons, and attracted more spectators than ever before, with aggregate attendance breaking the six million barrier. Average attendance exceeded 6,500 spectators, an increase of 8% on the previous year, while the Gagarin Cup Finals attracted an average of 9,934. Stadium occupancy rose to 82%, and surpassed 93% in the play-offs.

The KHL Development Strategy, introduced in February of this year by the League’s new President, Dmitry Chernyshenko, has already started to yield results in the first few months since its adoption. The League has managed to optimize costs and to lay the foundations for further economizing while improving its operational efficiency. By the close of the 2014-15 season, for the first time in the KHL’s history, a portion of the income yielded from the sale of commercial rights is to be distributed among the member clubs to further their progress toward achieving a number of defined goals in their operations and activities.

The League has introduced new rules for the Junior Draft. From now on, every club in the KHL will have the right to hold onto the desired number of young players developed through its schools. The new changes have been brought in to encourage the clubs to support and improve their hockey schools with the aim of developing and nurturing more home-grown talent. The new Junior Draft will provide an opportunity for more young players to enter the KHL club system, which in turn should lead to increased competition and present the teams with a wider selection of players.

Another innovation concerned TV coverage of the 2015 Gagarin Cup final series. The League introduced a new concept whereby the series was presented and broadcast as a single televisual event, with strong emphasis on maximizing the target audience of viewers with families. The deployment of a common production theme for each game of the series included a block of elements aimed at broadening interest among the wider public. This set of measures led to an increase in audience figures for the play-off games. The broadcasts also featured use of new technological developments, such as footage from a video camera mounted on the helmet of the match referee.

The League’s active dialogue with hockey fans was expanded to include the official KHL pages on social networks, and this resulted in a significant increase in interactivity and site traffic. Over the last three months the audience grew to a figure 25% higher than the total number of users accumulated by the League over the previous 6 years, while nearly 60 million people posted messages containing views or information on the play-offs. 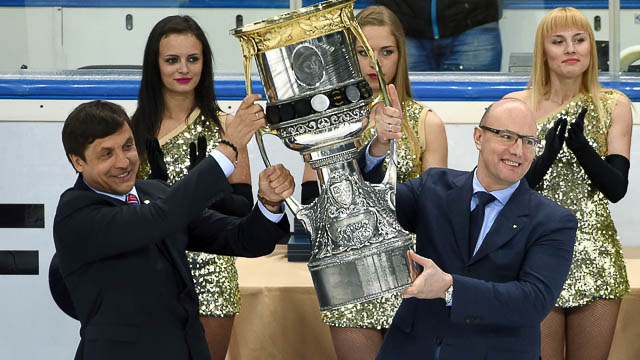 The 2015-16 season promises to be no less fruitful and eventful. Thanks to close dialogue with the Russian Hockey Federation and other key national players in the game, the League reached agreement on the principles underlining the schedule for the 2015-16 KHL Championship, one which accommodates the interests of the clubs, the national team, the League’s TV partners and the fans. The schedule provides for breaks in the season for Team Russia to prepare for and play in international competitions, while both the start and finish dates of the Championship have been moved forward to assist the national team’s preparations for the 2016 World Championships, to be hosted by Russia. The format will also differ from the 2014-15 season in that every KHL club will hold at least once at home and on the road against every other team, which will give fans in each home city the chance to see all of the best players and teams in the League.

With the marketing interests of its clubs and television partners in mind, the KHL reached an agreement with the federal TV channel, Rossiya 2, by which the channel will devote specific days to broadcasts of major games in the Championship. In order to increase viewing figures, the promotional campaign to raise awareness in the build-up to these hockey days will run for a full week, while the content on the day itself will comprise a live broadcast of a main game followed by highlights of the previous week’s action and other programs with a hockey theme.

Among the measures approved as part of the League’s Development Strategy is the imposition of strict standards for equipment at KHL arenas, including a phased transition period for the installation of perimeter boards with better shock-absorbing properties, in order to reduce the risk of injury to players. Clubs will also be required to improve the stadium lighting systems and thereby increase the image clarity and quality during live TV broadcasts.

An important factor aiding the League and its clubs to achieve the necessary level of financial stability is the progress made by all parties in agreeing to lower the salary ceiling over the next three seasons. The clubs also agreed to accept stricter requirements for financial guarantees as a condition of membership of the League.

After the end of the final series, KHL President Dmitry Chernyshenko had this to say: "Congratulations to SKA on your victory in the Gagarin Cup! You took a long and arduous route to the title, performed a miracle in the semi-finals, and are worthy winners of the trophy. Well done also to Ak Bars, the first club in the KHL to reach three finals. I am sure that Kazan, with such loyal fans, can expect many big victories in the future. Thank you to everyone who has supported our League in the past eight months. This season was one in which we have seen new Champions and reached new heights of achievement. I'm pleased that the progress made by the League goes hand-in-hand with the development of hockey across the country. A strong KHL means a strong Team Russia!"
Share
Прямая ссылка на материал