The grand final – redemption for Bilyaletdinov?

The back story
Zinetula Bilyaletdinov and Ak Bars are almost synonymous. The distinguished coach has won pretty much everything he can behind the bench in Kazan, including the first two editions of the Gagarin Cup. The only job that could take him away was the head coach’s role for team Russia, a stint that began triumphantly at the 2012 World Championship, but ended unhappily as the Olympic dream ended in the quarter finals in Sochi. After disappointment comes rehabilitation … and what better way to answer his critics than to lift a third Gagarin Cup in his first season back in club coaching?

To add a bit of extra spice, Bilyaletdinov’s grip on the trophy was finally loosened in season three by Salavat Yulaev … coached by his opponent in the upcoming series, Vyacheslav Bykov.

There’s also a second shot at glory for Justin Azevedo, the Canadian-Portuguese forward who blazed Lev to last season’s final and scored in all seven games of that thrilling clash with Metallurg Magnitogorsk. Those heroics weren’t enough to lift the cup, but will he land the big prize this time? 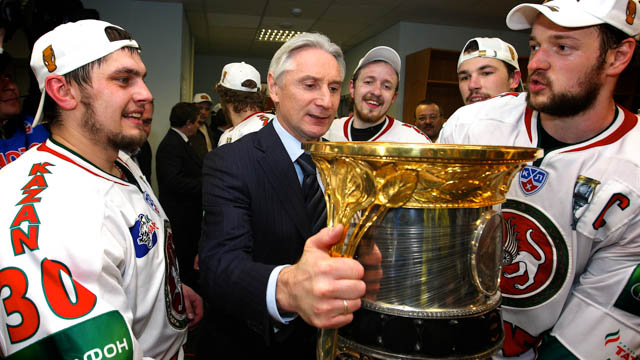 The road to the final
After topping the Eastern Conference in the regular season Ak Bars enjoyed a serene passage through the play-offs, winning each series in five games.

Admittedly the opening phase might have been a bit different: the early games against Avtomobilist were a struggle, with the underdog twice taking it to overtime before winning Game 3 in Yekaterinburg. Every game in the series was decided by a single goal, but Ak Bars’ greater post-season experience saw it through.

The Conference semi-final brought a match-up with Avangard. At first it seemed like another close series between these old foes was in prospect as the Siberians edged the opening game 4-3 in overtime. But Ak Bars slammed down the defensive shutters, blanking the opposition 4-0 and 2-0. Avangard finally hit the target again deep into period 3, Game 4, scoring on Anders Nilsson for the first time in 178 minutes, but the game was gone. Another shut-out on home ice sent Ak Bars through.

Sibir was the next opponent in an intriguing clash of experience and youthful optimism. The Novosibirsk team came to Kazan on the back of the best season in its history – and promptly ran into that defensive wall. Shut out in game one, limited to a single 52nd-minute strike in game two, and only able to raise hopes briefly with a win in game three before two further shut-outs saw Ak Bars end the series with back-to-back 1-0 overtime victories.

Why Ak Bars can win
Ak Bars’ hopes lie in a solid, tough to beat style, back-stopped by Anders Nilsson. The Swede has posted six shut-outs in these play-offs so far. Not everyone is a fan of the team’s style, with Zinetula Bilyaletdinov responding angrily to journalists’ questions about why games in Kazan rarely delivered spectacular hockey, but it is unarguably effective. The effectiveness with which Ak Bars stifled Sibir’s power play – which was running at an incredible 33.6% going into the Eastern Conference final, but which mustered just one goal in that series – highlights what this team does best.

On offense, it’s all been about Oscar Moller. The Swede didn’t have a dazzling regular season, delivering 14 goals in 52 games, but he’s caught fire in post-season to score 8 times. Incredibly six of them have been game-winners, three in overtime, making him the most decisive finisher in the competition. It’s a run of form reminiscent of Justin Azevedo’s feats with Lev Prague in last season’s play-off – and Azevedo is playing on the same line as Moller as he prepares for his second consecutive grand final. 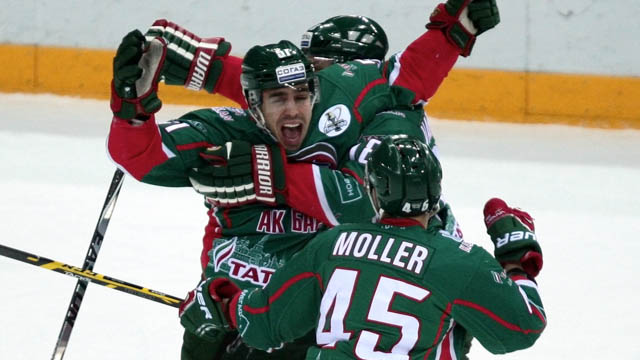 What they’re saying
“If you don’t like how Ak Bars plays, don’t watch them. There’s no need to impose your opinions on everyone else” – head coach Zinetula Bilyaletdinov at a press conference after a second successive 1-0 OT win over Sibir put his team into the grand final.

“We will stick to our guns. I can warn you right now, Kazan will play its traditional cagey hockey” – defenseman Evgeny Medvedev has no worries about being accused of boring people.

“SKA did something amazing. It was just crazy. I’ve been there myself, in junior hockey, and I know how when you win in Game 7 after losing 3-0 you feel a whole bunch of emotions. It’s gonna be real tough for us in the final” – forward Justin Azevedo reflects on SKA’s fight back to reach the Gagarin Cup final.