Gagarin Cup on the way to Kazan

At 11am on Friday, the 10th of April, the Gagarin Cup trophy departed the Moscow office of the Kontinental Hockey League and embarked on its traditional springtime journey to the cities hosting the final series. This season the destinations are Kazan and Saint Petersburg, so the coveted piece of silverware will arrive on Saturday, April the 11, in the home city of Ak Bars, where it will stay for three days before making the trip to Russia’s northern capital. 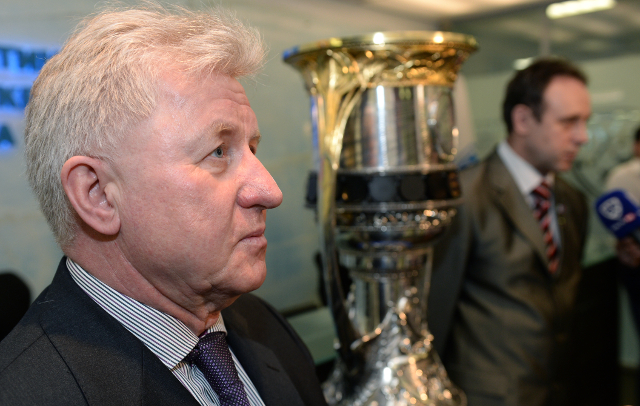 The Cup could hardly have been blessed with better traveling companions: accompanying the KHL’s major trophy on its long journey are the legendary goaltender, Olympic champion and seven-time world champion Vladimir Myshkin (pictured), currently the deputy director-general of Moscow’s new sports and entertainment complex, the Park of Legends, and former cosmonaut Sergei Zalyotin, recipient of the Hero of Russia award, who completed two successful missions into space as commander of Soyuz TM-30 and Soyuz TMA-1.crafts. Zalyotin has spent a total of 83 days, 16 hours, 35 minutes and 25 seconds in orbit.

“Although a couple of days remain until Cosmonauts Day (April 12), we space travel veterans begin our celebrations on March the 9th, the birthday of Yury Gagarin, the great pioneer whose path we all follow into space. For us it is a sacred occasion and we are doubly pleased that it coincides with the opening of the KHL final series,” - said Sergei Zalyotin, in an interview with the KHL Press Service.

“Yury Gagarin was a good hockey player.”
“Yes, as the song about him says, ‘Remember the kind of guy he was / how he’d step onto the ice with stick in hand.’ In the film vaults at the Space Center they have many documentaries about the earliest cosmonauts, so of course we’ve all seen clips of Yury Gagarin and his colleagues playing hockey.”

“Does the current generation of cosmonauts have many keen hockey fans?”
“The head of the Cosmonaut Training Center, Yury Lonchakov, is a very accomplished player, and I’m trying to reach his level. Sasha Samokutyaev, who only returned from space two weeks ago, is also very good. And since, as kids, we all took part in the national Golden Puck tournaments, back in the days when hockey was played by children in every yard. They had a saying back then that the USSR was space, ballet and hockey.”

“Is it possible to be a cosmonaut and not be a sportsman?”
“They are two sides of the same coin. Without a strong, athletic conditioning, you’d never last in space.”

“The hockey play-offs make an epic saga with rituals for players and coaches, such as not shaving until they win the trophy or are eliminated, so by the end of the season some are sporting long beards. Are cosmonauts similar?”
“I can assure you, we’re the same. Before significant missions we get our hair cut short, and then we must take a leak against the wheel of the bus that brings you to the launch pad. Cosmonauts are all superstitious types.”

“Where do your sympathies lie in the final series?”
“For some reason nowadays, in all walks of life, it seems an unpopular choice if you cheer for the Petersburg guys, but as a child I supported CSKA, so I’ll always have some affection for the army teams. Whoever wins, I’ll be happy if the final series is full of exciting and interesting hockey.”

“Tell us, please: how does the Earth look from space?”
“I will answer with the words of Yury Gagarin: our planet is white, blue and very small. Let's protect it and cherish it.”

Vladimir Myshkin had this to say at the ceremony: “Seven years have passed since the Gagarin Cup set out on its maiden voyage to the finals. In that first season it traveled, like today, to Kazan. Since that time the trophy has gained in popularity and prestige, so now it is recognized all throughout the hockey world and to compete for it would be considered an honor, I'm sure, by any professional. This upcoming series follows a great tradition, in that the final has always featured one club which has never reached this stage before, and this year it is SKA. It will also be a battle between completely different hockey philosophies, principles and coaching styles. I have no doubt that those who predict boring hockey will be proved wrong. Each game will be a drama, with powerful, intelligent play and, of course, the supremely high level of technical skill of the players. I hope the teams will play the way their hearts tell them and that they enjoy the experience, despite the supreme effort demanded. And I hope all the spectators will be delighted.”

Early on Saturday morning, the Gagarin Cup will arrive by train in Kazan and attend an official welcoming ceremony. The trophy will then travel to the Tatneft Arena, to attend Games 1 and 2 of the final series on the 11th and 13th of April.
#Gagarin Cup
Share
Прямая ссылка на материал