Sometimes, you really can believe the hype. CSKA and SKA promised a pulsating evening of hockey –with the prospect of history in the making – and both teams delivered as SKA made it through a thrilling Western Conference final decider in Moscow.

The series had already pencilled its place in the history books thanks to SKA’s backs-to-the-wall battle from 0-3 to bring us to game seven, something that had never before been achieved in Russian hockey. But there was another big fight-back on the way before Patrick Thoresen got the vital goal to write this game – and this series – firmly into the record books as the St. Petersburg team into the first grand final of its history.

Thoresen’s winner came midway through the third, snapping a 2-2 tie with a deft touch on Anton Belov’s slap shot to leave Kevin Lalande stranded in CSKA’s net. That was enough to secure the win on the night and the series, despite the home team’s best efforts.

CSKA tried everything in search of an equalizer, but could not force over time: the closest it came was a few moments after Thoresen’s goal when Roman Lyubimov – the scourge of Mikko Koskinen in the early games of this season – forced the puck into the net. However referee Alexei Anisimov to rule it out immediately for a high stick that was clearly visible without recourse to the video official.

That was the second time on the night that CSKA had been denied by the referees. On the first power play of the game, as early as the third minute the video official ruled out a home goal. Things got worse soon when Ilya Kovalchuk put SKA 1-0 up midway through the first, silencing his critics by stretching his scoring run to five games when his team needed him most. Midway through the middle frame Evgeny Dadonov made it 2-0, edging ahead of Igor Grigorenko in the post-season goalscoring charts. 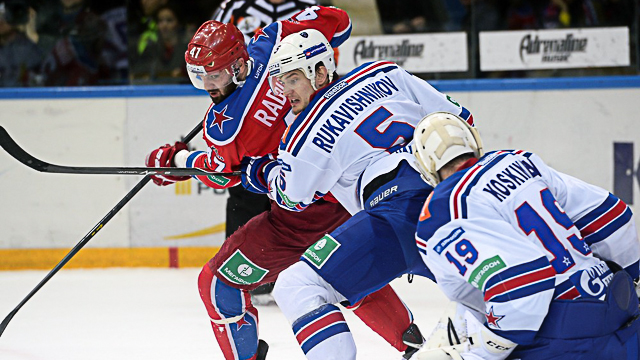 Suddenly it was CSKA’s turn to seek a big fight back and call on its big-name players to deliver. And the Moscow men came so close. Alexander Radulov inspired a dramatic recovery in the latter half of the second session, scoring the 1-2 goal that gave his team hope. Hope became belief moments later as Stephane da Costa tied the game with a superb shot off Grigorenko’s pass: 2-2, 20 minutes to play and after six games and two periods there was nothing between the teams.

The tension was intense, the pressure overwhelming. Two teams desperate to lift the biggest prize in the competition and justify the lavish expenditure invested in them face a straight fight – time to stand and deliver. And Thoresen’s goal delivered the Gagarin Cup final berth to St. Petersburg. The season’s culminating event starts in Kazan on Saturday as Ak Bars take on SKA in what promises to be another fantastic clash. CSKA, meanwhile, can content itself with the Russian Championship secured in the regular season even as it reflects on the continuation of the ‘curse’ that keeps table-topping teams away from the Grand Final.