It might not be Easter in Russia for another week, but SKA is determined to continue its resurrection in the Western Conference final. Sunday’s home victory over CSKA tied the series at 3-3, an unimaginable turnaround after the Moscow team roared into a 3-0 lead.

The decisive moment here came in the 70th minute. Patrick Thoresen delivered the killer blow, profiting as CSKA’s defenseman made the wrong decision and headed for the net instead of closing down the Norwegian in the slot. Thoresen, in his final season in the KHL, delivered the finish off Ilya Kablukov’s pass to spark delirious celebrations that even saw Ivan the Terrible, reincarnated as one of SKA’s most distinctive fans, take to the ice to congratulate the team on taking the battle to the final fight.

But as an improbable victory steadily becomes a real possibility for SKA, added pressure is taking its toll on both teams – as the first two periods of this clash demonstrated. SKA started out in the same vein as the previous two games, well aware that it had nothing to lose and willing to risk taking the game to CSKA. It was a tactic that had brought back-to-back wins, 4-1 and 6-2, to revitalise a series that seemed to be all but over.

At first, all went according to that script. Ilya Kovalchuk’s power play goal, his first of the series, put the Petersburg team up in the first and suddenly the impossible dream was tangible reality. The greatest of escapes was very much alive and CSKA faced the added pressure of becoming the first team to give up such a commanding lead. SKA, leading the shot count 9-3, appeared rampant. 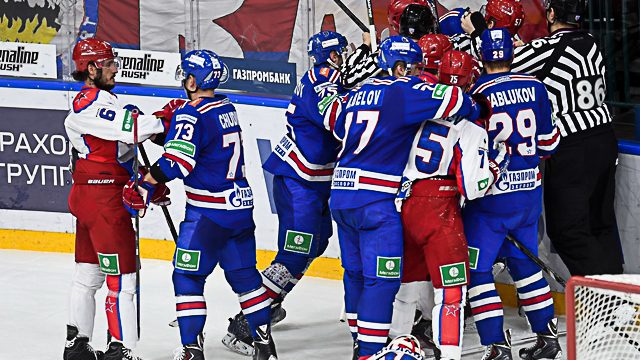 But suddenly SKA also had something to lose. Having got so close to squaring the series and forcing a game-seven decider on Tuesday evening, the fact remained that the home team was still a single defeat away from elimination. A hint of tension crept into its play, allowing CSKA to hit back. The shot count began to swing back in the visitor’s favor, and Stephane da Costa swiveled onto the rebound from Simon Hjalmarsson’s shot to tie the scores on the power play in the 25th minute.

The third period was cautious, with both teams well aware of the consequences of failure; overtime was, for SKA at least, ecstatic and the whole story heads to its final, thrilling chapter on Tuesday in Moscow.