Ak Bars booked its place in the Gagarin Cup final with an overtime victory over Sibir, wrapping up a 4-1 series victory.

Once again there was little between the two teams for much of the game, but the vital moment came six-and-a-half minutes into the extras when Mikhail Glukhov got his first point of the series to score the game- and series-winning goal. Sadly, as is so often the case in games like this, the decisive blow was born of a defensive error. Konstantin Alexeyev got himself caught in possession on the boards as he sought to clear his zone and Mikhail Varnakov pushed the puck into the path of Glukhov. The Ak Bars forward rushed for the net, picked his spot and fired into a tight gap high on Alexander Salak’s stick side to settle the outcome.

After 60 goalless minutes in Novosibirsk two days before, these two produced a similar stalemate in Kazan. For Sibir, knowing that defeat would spell the end of its play-off campaign, the emphasis was on ensuring that Ak Bars could not forge ahead in this fixture. For the home team, however, typically cautious tactics meant that Zinetula Bilyaletdinov’s men were content to hold and wait for the pressure of the occasion to undo Sibir. The result, until the last, was a cagey clash that offered more by way of technical merit than artistic impression. 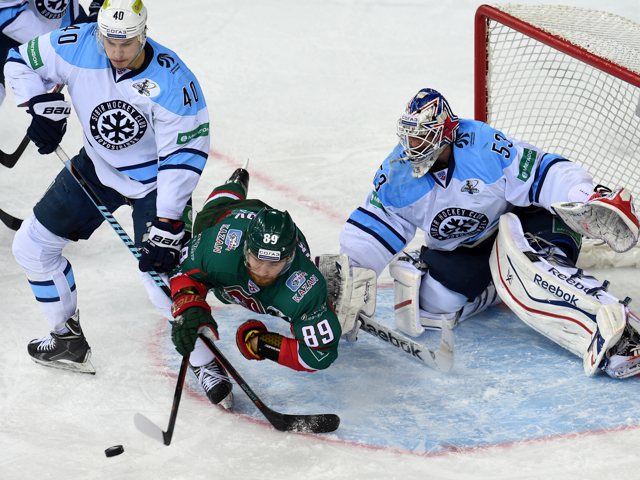 Regulation time saw Sibir content to absorb pressure – Ak Bars outshot its opponent almost 2-to-1 and was particularly impressive in the first period when Oscar Moller carved out a trio of presentable chances for himself. But the Swede, so often the game-winner in these play-offs, could not find a way past Alexander Salak and gradually the game sank into a nervous encounter with clear openings becoming increasingly rare. Overtime saw Ak Bars gradually tightening the screws before Glukhov’s winning contribution.

For Sibir the season comes to an end, but not without the Novosibirsk team celebrating its best-ever campaign. Second in the East in the regular season, Sibir went on to achieve its longest play-off campaign after it saw off Traktor and Metallurg Magnitogorsk to reach the Conference final. However, that proved to be the last step for Andrei Skalbelka’s men as Ak Bars’ greater post-season know-how made the difference. The Kazan team now awaits its opponent in its third Gagarin Cup final … and its first since season two of the KHL.