SKA ensured that the Western Conference final series would continue with another victory over CSKA, once again dodging elimination and moving closer to an unprecedented fight-back from 0-3.

Suddenly SKA’s second line has come to play, contributing seven goals in two games to transform the contest from procession to battle. Evgeny Dadonov led the way in this one with two goals, overtaking CSKA’s Igor Grigorenko as the top goalscorer in the play-offs. His second of the night, and his 11th overall, was particularly impressive – and important, as it snuffed out a CSKA renaissance and stretched the visitor’s lead to 4-2 at the second intermission.

The pre-match talk focused on the return of French forward Stephane da Costa to CSKA’s ranks, but much like the previous clash in St. Petersburg it was Dadonov’s line that caught the eye. He was involved as SKA’s power play picked up where it left off in Wednesday’s win, claiming an assist as Artemy Panarin opened the scoring in the ninth minute with a carefully placed shot to the top shelf from a tight angle. Then he chased starting goalie Stanislav Galimov in the 12th minute, punishing a sloppy pass by completing a counter-attack with a shot that went in off the netminder’s shoulder.

But CSKA rallied in the second period. Alexander Radulov exchanged passes with da Costa before scoring with a formidable strike just 36 seconds into the middle frame, and Mikko Koskinen found himself fully extended as the home team closed in on an equalizer. Once again, though, ill-discipline got the better of the home team. Igor Makarov got into a scuffle with Anton Belov and even though both players were sin-binned his team’s momentum dissipated. Andrei Kuteikin scored in the subsequent 4-on-4 play to make it 3-1.

Da Costa then celebrated his return with a goal, picking his spot to perfection to squeeze a wrist-shot past Koskinen. Incredibly, it was the first time in the series that CSKA had scored without Alexander Radulov on the ice, but it wasn’t enough to haul the team back into the game. Instead Dadonov found the key to unlock the defense once again, collecting Vadim Shipachyov’s soccer-style pass and making a mug of Bogdan Kislevich before completing a superb play with a shot past Kevin Lalande.

In the third period CSKA’s defense became stretched as the team chased the game in vain. Panarin was the big beneficiary: Shipachyov completed a hat-trick of assists as his rush left the home team’s players almost in a line as he slipped the puck left for Panarin to aim for a huge target to get his second of the night. 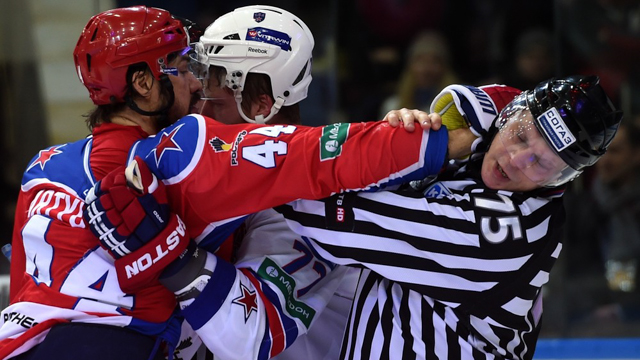 CSKA gambled early, withdrawing Lalande with more than six minutes to play in the hope of triggering a miraculous recovery, but the plan backfired when Anton Burdasov added a sixth within moments. Suddenly a series that seemed to be all but finished is alive and kicking once again. The teams head to Petersburg on Sunday for game six with SKA full of renewed belief and CSKA trying to overcome a nagging doubt about its chances. Will it be game, set and match – at last – for the Moscow team, or will SKA set up a winner-takes-all showdown?
#West
Share
Прямая ссылка на материал