The Finest Medals for the Greatest Players

The climax to the seventh season of the Kontinental Hockey League will feature a brand new innovation - unique, custom-made mosaic medals for the victorious players. The elaborately decorated medals are the result of recent technological advances, and the design was created to reflect the atmosphere and dynamism of hockey. Each medal is in the style of a miniature puck, and its diameter, 3 inches, corresponds precisely to the internationally accepted standard of the symbol of hockey. The new medal is the brainchild of the master craftsmen from the renowned jewelry company, Adamas, the main supplier of the winners’ medals at the XXII Olympic and XI Paralympic Winter Games in Sochi.

The front of the medal features the figure of a hockey player skating on snow-white ice. Around the circumference is engraved the name of the Championship, in Russian and in English, ​​and the year of the competition: 2014-2015. The reverse side is adorned with the emblem of the Kontinental Hockey League. The manufacture of such unique medals combines intricate craftsmanship by hand with the latest in innovative jewelry technology. 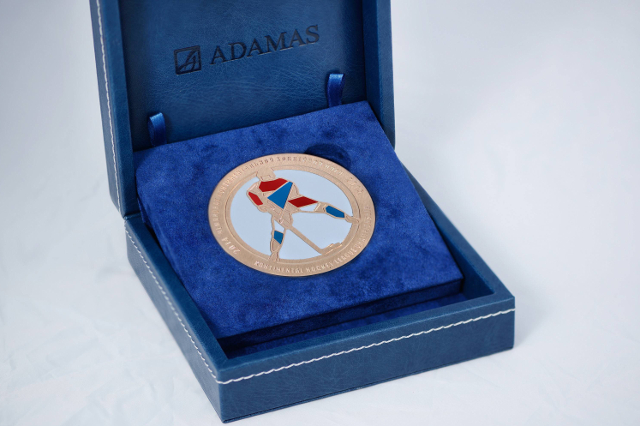 Each medal takes about 12 hours to create. Among the many innovations in the new technology is a process in which the surface of the medal is coated with a protective varnish containing nano-ceramics, which enables the metal to retain its original luster for many years. Just as impressive is the technology behind the mosaic of metal, in which 12 tiny geometric shapes are cut by laser from high-precision leaf metal a mere 0.02 mm thick.

The tinted, non-ferrous raw materials were specially commissioned for the KHL Championship medals. They underwent a range of severe tests which confirmed the chosen metals’ high resistance to wear and tear, corrosion, weathering, and sharp variations in temperature and humidity.

Dmitry Chernyshenko, President of the KHL, said: "Hockey is traditionally the most popular winter sport in Russia: with its spectacular goals, the uncompromising battles between the teams and the most powerful collisions between the players. The KHL medals will have their own unique design and will eloquently represent the dynamism of our beloved game. I’d like to thank the team from Adamas for its creativity and innovative manufacturing technology."

Maxim Weinberg, Executive Director at Adamas, had this to add: "In our country, we have a special relationship with hockey. This is one of the most popular sports – a national symbol and a source of great pride in our country, so we realize that such a medal must be a really special one. The creative team at Adamas was given a ground-breaking and extremely demanding task. The mission was quite a risky one, as the project was implemented in record time - less than three months - and it was our first experience of using "industrial" techniques for manufacturing the metal mosaics. We are delighted that the KHL has supported this idea. The images on the medals have turned out to be genuinely dynamic, modern, and lifelike. I am sure every champion will see himself in the medal, and for many years it will provide him with a vivid memento of a brilliant performance." 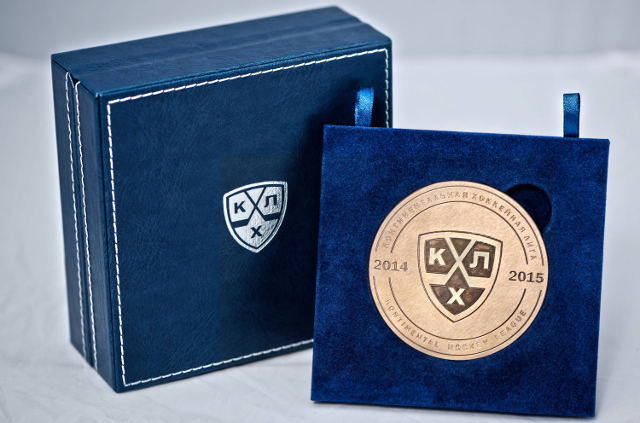 The consignment for the Kontinental Hockey League will comprise 200 medals, to be awarded to the teams finishing the season in bronze, silver and gold medal places. The medals are forged of bronze and coated with gold for the champions or silver for the beaten finalists. Each weighs around 320 grams, or a little over 11 ounces. They will be presented at the grand award ceremony in April after the end of the Gagarin Cup play-offs.

ADAMAS FACT FILE:
The Adamas company was founded in 1993 and today is the largest manufacturer of jewelry in Russia. It boasts its own retail network with more than 250 outlets sited in all the regions of the Russian Federation, which makes Adamas one of the top 3 jewelry retailers in the country. The brand is one of the most sought-after in Russia, and according to expert estimates more than 50 million Russians are now the proud owners of Adamas jewelry. Adamas was also the official supplier of the trophies for the Formula 1 Grand Prix Championship and the medals for the 2014 Winter Olympiad in Sochi, the 2014 World Chess Championship, the Power Pro Show international bodybuilding tournament, and has also designed and created the medals for the inaugural European Games, to be held in Baku in June of 2015.
Share
Прямая ссылка на материал