Oscar Moller got his eighth play-off goal – and crucially, his fifth game-winner – to snap a 0-0 tie midway through the first period of overtime and put Ak Bars one step away from its third Gagarin Cup final.

For long periods the two goalies, Alexander Salak and Anders Nilsson, were on top: Nilsson blocked 25 shots from the home team while Salak frustrated 36 attempts on Sibir’s net before Moller got the game winner on 67:51.

But when the Swedish forward, so lethal in overtime this post-season, got his chance, he took it with a crashing one-timer from the edge of the circle off Igor Mirnov’s pass from the boards. It was a goal out of nothing; Mirnov seemed well marshalled by opponents while Moller was some way from Salak’s goal, but the power and accuracy of the shot, coupled with Renat Mamashev’s position screening his own goalie, proved enough to settle the game for Ak Bars. 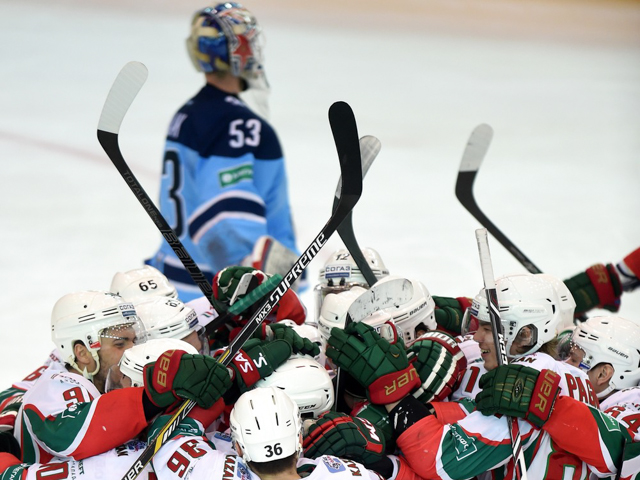 Earlier, Sibir had the better opportunities in a first period disrupted by a series of penalties. First the home team almost great a shorthanded goal when Oleg Gubin stripped Stepan Zakharchuk of the puck on the blue line and skated in on Anders Nilsson’s net, only for the goalie to block the shot. Then Sibir enjoyed 72 seconds of 5-on-3 hockey with Igor Ozhiganov testing the Swede with a one-timer from the face-off spot off Alexei Kopeikin’s pass. Ak Bars had fewer clear sights of goal, but the ever-dangerous Oscar Moller caused some alarm for Alexander Salak on an early power play.

However, the attacking tempo dropped in the middle frame. Both teams cut out the errors and the penalty box remained empty once Sibir’s Viktor Bobrov had served his time for a holding penalty handed out on the hooter. With neither team eager to take a risk and force the pace, scoring opportunities were at a premium and it was little surprised that the scoresheet remained blank at the second intermission.

Early in the third period Zakharchuk fell found of the officials and on the subsequent power play Sergei Shumakov believed he had put Sibir up. Jonas Enlund’s pass from behind the net found him in space and he fired a low shot behind Anders Nilsson from an incredibly tight angle. The puck rebounded off the far post, and Shumakov’s luck was out as it squirted back through the goalie’s pads without bouncing into the net. That prompted an extended session for the video referee before the effort was disallowed. The home crowd was disgruntled, but in truth the images available to the TV coverage made it impossible to state that the rubber had completely crossed the line. Neither team came as close again until Moller’s decisive effort flew inside the same post that earlier denied his rival.