SKA produced a blistering performance to extend the Western Conference final series against CSKA with a 4-1 home victory. Three goals from the Petersburg team’s second line of Evgeny Dadonov, Vadim Shipachyov and Artemy Panarin, all three of them on the power play, made the difference as SKA turned the formbook upside down in emphatic style.

Trailing 0-3 going into Wednesday night’s game, SKA knew that there was no more margin for error if it was to avoid an ignominious exit in the last four and came out with a high-octane start. Early pressure paid off in the seventh minute when Denis Denisov’s thoughtless pass from behind his own net went to straight to Ilya Kovalchuk. Kovi fired the puck straight to the slot, where Patrick Thoresen was all alone to open the scoring. Surprisingly that was Kovalchuk’s first point of the series.

It was 2-0 shortly after the midway point of the opening stanza with Dadonov getting his first of the night. He fired home a one-timer after Shipachyov’s pass from behind the net as SKA converted its second power play of the game.

The second period brought two more goals, Shipachyov making it 3-0 after a lovely bit of tic-tac-toe passing among his line-mates and an angled shot through Stanislav Galimov’s five-hole as CSKA struggled to get its penalty kill up to speed. Number four soon followed, with Dadonov producing a replica of his first goal off a Panarin pass and CSKA opted to send Kevin Lalande on to the ice in place of the unhappy Galimov. 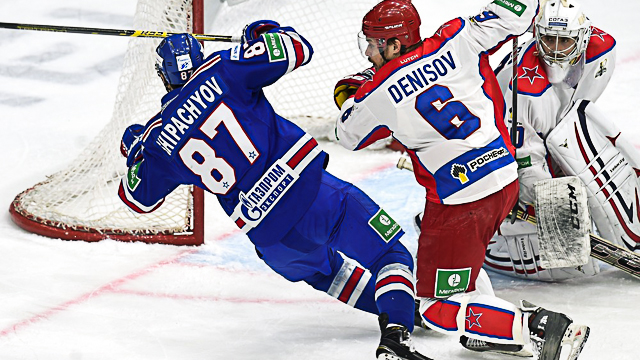 The Moscow team managed to pull a goal back early in the third with Alexander Radulov stretching his point-scoring streak to five games. He had an assist on Igor Grigorenko’s first goal of this series, awarded after the video ref confirmed that the puck had crossed the line after the forward slung it against the foot of the post.

That could not spark an unlikely revival, though, and SKA held its opponent at arm’s length quite comfortably in the closing stages to record its first win of the series. That success was just in time to escape an embarrassing sweep and bring the action back to Moscow on Friday when CSKA will have a second attempt at booking its first ever Gagarin Cup final appearance.