Sibir got back into the Eastern Conference final series with a home win over Ak Bars, bringing the scores back to 2-1 and maintaining its own impressive post-season record in Novosibirsk. Victory on the night by the odd goal in three continues this series’ sequence of low-scoring, hard-fought games and promises plenty more hockey to come to determine who will represent the East in this year’s Gagarin Cup final.

The home team made the better start to the game, inspired by a capacity crowd in Novosibirsk and motivated by the need to ensure that Ak Bars could not take an early grip on this game as it had twice in Kazan. But a pair of penalties against Sibir midway through the first period turned the momentum of the game into Ak Bars’ favor as an evenly matched game went into the intermission goalless.

The second period once again saw Sibir looking for the breakthrough and this time it came in the 30th minute – albeit after a long consultation with the video official. Dmitry Kugryshev knocked Maxim Ignatovich’s shot down to the ice and through the legs of Anders Nilsson but it wasn’t clear how high his stick was when he made contact in front of the net. After several minutes of scrutinizing dozens of camera angles, the referees ruled that the stick remained below the level of the crossbar and the goal stood. 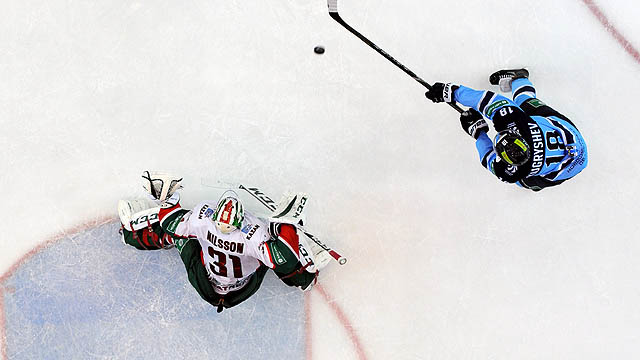 Immediately Sibir had a power play but failed to extend its lead and Ak Bars hit back in the 35th minute. Konstantin Koltsov was the scorer but the hard work came from Artyom Lukoyanov as he battled his way from the boards to the slot before teeing up his team-mate. But in the last minute of the middle frame Sibir edged in front once again, helped by a failed Ak Bars power play that collapsed when Justin Azevedo was sin-binned for hooking less than 30 seconds after his team gained the advantage. Worse followed: Sibir’s own brief numerical advantage ended with Igor Ozhiganov smashing home an Oleg Gubin pass to make it 2-1.

The third period gave Sibir a rare opportunity to see what answers its opponent could come up with as it sought to defend its lead. This time, though, it seemed that answers were scarce for Ak Bars. There were some chances, especially in a frantic final storm as Zinetula Bilyaletdinov sent his team out in a 6-on-5 format for the final minute, but Sibir defended with discipline and determination to ensure that there were few serious scares on the way to a vital success.

The teams meet here once again on Thursday; only one visitor has managed a post-season win in Novosibirsk, and if Ak Bars cannot improve on that record the series will be tied ahead of its return to Tatarstan at the weekend.