Fans with long memories might recall how Russian hockey often followed the same script. CSKA would bowl through each season in almost untouchable form, and every time it seemed that a serious challenge was emerging the Army Men would find an extra gear to stay ahead of the competition. It brought unprecedented success to the Moscow team – and there are signs that the same narrative might be unfolding this season.

After two wins in the capital the question was all about whether CSKA could bring its imperious form on the road against its closest rival in the regular season. SKA’s form was also impressive, and its imperious dismissal of Dynamo in five games suggested that this series would be a real battle to the last between two teams in top condition. And yet, three games in, the prospect of a sweep is alive and well.

However, if the pre-series talk was all about Alexander Radulov and his devastating partnership with Igor Grigorenko, the fate of this battle has been determined by the little-known Roman Lyubimov. CSKA’s youth team graduate had a moderate regular season and was without a post-season point as he battled with Nikolai Prokhorkin for a place on the roster. But in this series he has come alive, with a goal and an assist in the first game, then 2+1 including an overtime winner in the second meeting. Today he opened the scoring in the second period, finding space on the slot to wrap up a move involving Radulov and Grigorenko. 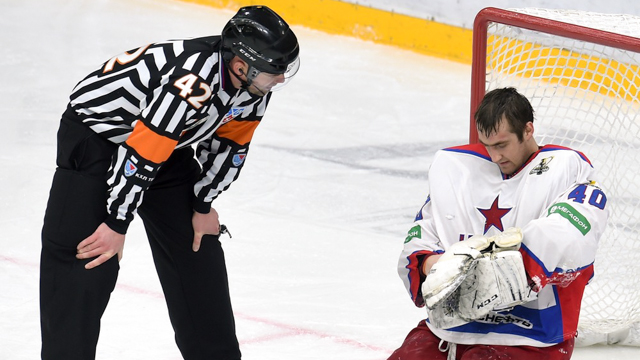 Denis Denisov doubled the lead on the power play midway through the third, with Radulov and Grigorenko once again playing a part, and that blow felt terminal for SKA’s hopes in the game – and perhaps the series. True, Maxim Chudinov pulled on back almost immediately – his first post-season strike – with a powerful shot from middle distance to give SKA eight minutes to turn the game around. At the same time Ilya Kovalchuk picked up his first point of the series to raise hopes that the contest could be extended further. However an empty net goal for Radulov ensured there was no way back on the night and SKA now faces an early trip to the last-chance saloon when the teams meet once again on Wednesday.