Roman Lyubimov scored the game winner in the 102nd minute to snap a 2-2 tie and give CSKA a vital victory in the third period of overtime.

The key moment was created by Alexander Radulov, who picked up his second assist of the game to move ahead of Sergei Mozyakin in the post-season scoring chart. Radulov worked behind the net before delivering the puck to the slot where Lyubimov was on the spot to score his second of the night and settle the outcome. 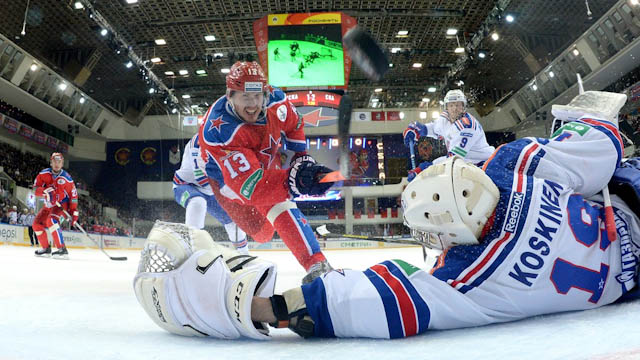 Lyubimov’s goal means that CSKA heads north for game three on Monday with a commanding 2-0 lead in the series, piling the pressure on to a SKA team that has never reached a grand final in its history. It also ended perhaps the best game of this season’s play-offs so far.

The action began when SKA took the lead in the 12th minute when Evgeny Dadonov scored a power play goal on the rebound from Andrei Kuteikin’s shot, but CSKA levelled at the start of the second with a Nikita Zaitsev power play goal to open his post-season account. But after two periods of absorbing action the game really sprang to life in the third amid controversy over SKA’s second goal.

It all happened in the 45th minute when the visitor went ahead for the second time thanks to Vadim Shipachyov and the video referee. The Petersburg forward got on the end of Artemy Panarin’s pass as it slung across the face of the net and diverted it home with an outstretched leg. The validity of the goal stems from the contentious wording around a ‘kicking motion’; in this instance the forward’s leg was clearly far from his body as he deflected the puck past Stanislav Galimov, but the referee may have ruled that it wasn’t deliberately swinging toward the disc. However, the decision made few friends among those backing CSKA.

The home team had 14 minutes to recover from that blow, and managed to tie it up in the 53rd thanks to Lyubimov’s second goal of the series. He scored off an Alexander Radulov pass to take the game into overtime. The first period of the extras could not separate the teams, although Mikko Koskinen made several fine saves to deny CSKA and at the other end Anton Burdasov rattled the frame of the goal with a long-range shot that deceived Galimov. 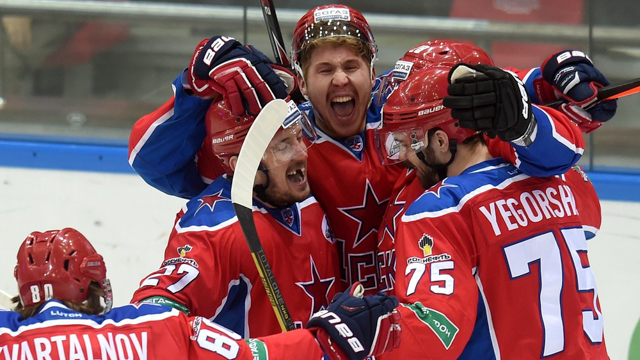 In the second period of overtime SKA had two big chances to win it – but ended up defending grimly at times to stay in the game. The visitor earned the first power play of the extras and then got a penalty shot after Grigory Panin pushed the goal off its moorings. Roman Cervenka had the attempt but seemed to slip as he fired in his shot and put the puck wide. Buoyed by the let-off CSKA killed the rest of Alexander Radulov’s penalty and soon had a big advantage of its own when Patrick Thoresen was handed a 5+20 penalty. That chance went begging, but Lyubimov delivered the killer blow soon afterwards.