Ak Bars produced a thoroughly professional display to open up the Eastern Conference final series with victory over Sibir. A strong first period, and 21 saves from Anders Nilsson, proved sufficient to secure a 2-0 success for the team from Kazan.

The home side took the lead midway through the first period thanks to Oscar Moller. The Swedish forward earned a reputation for decisive late goals earlier in the play-offs after bagging back-to-back overtime winners against Avtomobilist in the first round, but this time he opened the scoring with an effort from the top of the circle that surprised Alexander Salak at his near post.

That goal was deserved: Ak Bars began brightly and carved out a couple of presentable opportunities in the first two or three minutes, springing something of a surprise for those who anticipated a cautious, patient style based on waiting for opposition errors . However, fans with longer memories might have recalled how the teams’ play-off clash last season began in similar fashion, only for Sibir to hit back with a victory on the night that set up an eventual success in the series. This time, though, Ak Bars maintained its high tempo, making it hard for Sibir to get its offense going. The reward came in the last minute of the opening session when Kostantin Koltsov doubled the lead after his shot rebounded awkwardly and deceived Salak. 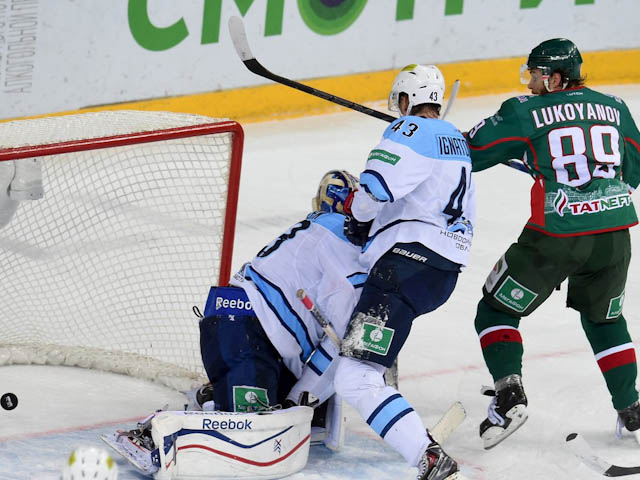 With the pressure firmly on Andrei Skabelka’s team, Sibir had to raise its game in the second period. The visitor managed that, looking far more threatening, but could not find a way past Anders Nilsson despite having far more possession and spending more time in the offensive zone. And that pattern continued into the third as the home team kept the door firmly shut – even pulling Salak with more than two minutes left to play did not enable the Novosibirsk team to create a very clear chance to get on the scoreboard.

The teams return to action on Sunday, with Sibir in search for a way to get more pucks to the net and get back into the series.