Youth and experience clash in the East. Eastern final preview

The Eastern Conference final offers a host of compelling narratives as Ak Bars and Sibir face off for a place in the biggest series of all. It’s David and Goliath, as the plucky outsider from Novosibirsk prepares to take on the powerhouse from Kazan. It’s a revenge mission, as Ak Bars looks to pay back last season’s first-round exist against the same opponent. It’s a chance for a new generation of stars to blaze from the firmament as Sibir’s young hopefuls looks to follow the likes of Vladimir Tarasenko and Nikita Zaitsev. And maybe it’s a shot at redemption for Ak Bars, trophy-less since back-to-back triumphs in KHL seasons one and two, and head coach Zinetula Bilyaletdinov, so heavily criticized in the wake of Russia’s Olympic disappointment last year.

For Sibir, making its first appearance in this stage of the competition, a conference final is a chance to add another chapter to the league’s already impressive history of underdogs with bite. Previous seasons have seen the likes of HC MVD, Atlant and Lev Prague make the grand final to the surprise of everyone outside those organizations. For the Siberian team, shrewdly guided by head coach Andrei Skabelka in his first campaign at the helm of a KHL outfit, the formula of hard work and indefatigable team spirit follows the example of Oleg Znarok’s HC MVD roster in 2010. While others talk about a miracle season, Skabelka is more down-to-Earth. “I don’t believe in miracles,” he’s fond of saying. “I believe in Sibir. I believe in hard work, because that’s what gets results.” 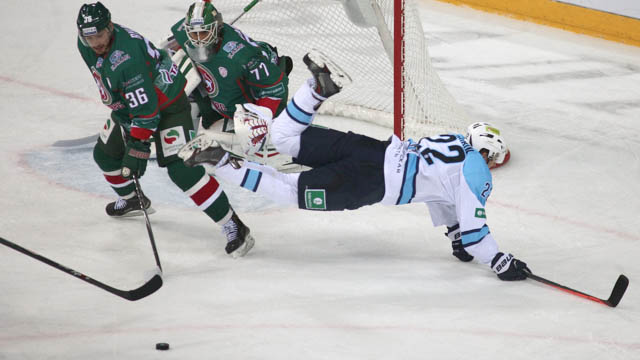 His roster is youthful, with Oleg Gubin, 34, the oldest player at the club. Swedish defenseman Patrick Hersley tops the post-season scoring with 3+6=9 and has been a big contributor to a lethal power play that has delivered on one in three opportunities in the play-offs. But it’s a non-starry line-up, largely assembled from players who headed to Novosibirsk in search of ice time that was denied them elsewhere. One of them, 22-year-old former CSKA blue-liner Igor Ozhiganov, is a big believer in the power of team-work against the big guns. “Our performances this season show that money can’t buy everything,” he said at his team’s open training session earlier this week. “If you look at a team as wealthy as SKA, for example, they went out in the second round last season. You need everything to come together: first, everyone needs to pull together to achieve the goal. For us it’s also important that everyone understands his role.”

That team spirit has seen Sibir take second place in the East, outstripping Avangard and Salavat Yulaev in the Chernyshev division and then seeing off defending champion Metallurg Magnitogorsk in the play-offs. Its form good enough to give the team belief that it can repeat last year’s post-season success against Ak Bars and ultimately lift the cup. 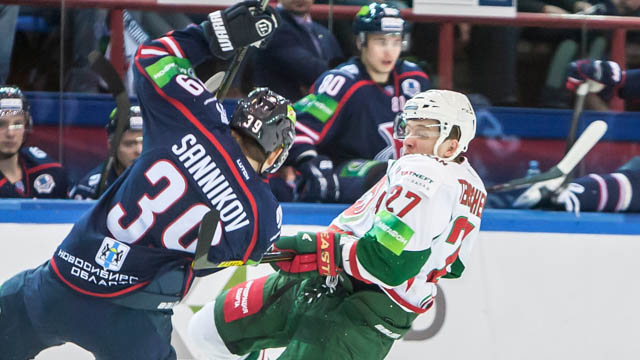 However, Ak Bars represents a formidable obstacle. If Sibir is a young, hungry roster, Ak Bars is dripping with experience. Behind the bench Bilyaletdinov knows better than most what it takes to win this trophy. On the ice defensemen like Ilya Nikulin and Evgeny Medvedev have handled pressure situations so often that it’s become second nature. The strike trio of Oscar Moller – scorer of back-to-back overtime winners in the first series against Avtomobilist – Igor Mirnov and Justin Azevedo, star of Lev’s run to the final last year, packs a dangerous punch on offense. Best of all, goalie Anders Nilsson has been in sensational form, stopping 94.2% of the shots he’s faced, posting three shut-outs to sink Avangard and pulling off some breathtaking saves along the way.

Among the players, revenge is the driving motivation. Kirill Petrov admitted that last season’s first-round defeat in Novosibirsk was as painful as it was unexpected, while Medvedev is determined to come out on the winning team this time around. But he’s also expected a hard-fought, cagey series. “We’ll see some defensive hockey,” he told R-Sport. “The games could be decided by whoever makes a mistake and I’m not sure how much of a spectacle it’s going to be. But I do know it will be an intense struggle all the way.”

Ak Bars vs Sibir gets underway in Kazan on Friday and Sunday. The action moves to Novosibirsk on March 31 and April 2 before returning to Tatarstan if needed on April 4.