CSKA drew first blood in the Western Conference final with a 3-0 victory at home to SKA. Alexander Radulov and Roman Lyubimov – the latter recalled to the team tonight in place of Nikolai Prokhorkin – led the scoring while Stanislav Galimov also celebrated a successful return to action with 25 saves for his shut-out.

As always in a high-profile clash like this the first goal was crucial – and CSKA claimed it in the seventh minute. Radulov was the scorer, spotting the loose puck beneath Mikko Koskinen’s pads after the Finn blocked Lyubimov’s shot, but the key play came seconds earlier when Radulov spun onto the slot and played a wonderful instinctive pass through his own legs to give his team-mate the shooting chance.

That duo reversed its roles in the middle session with Radulov feeding Lyubimov behind the net and watching his colleague score on the wraparound. A quick check with the video official confirmed the goal and after 24 minutes the home team was well on the way to an opening victory. 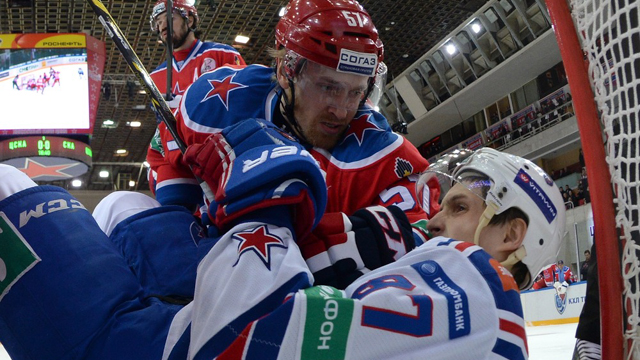 The talk at the intermission was all about how CSKA needed to play cautious hockey, avoid needless penalties and keep SKA at arm’s length in the final stanza. That task was achieved with something to spare, while Radulov produced another masterpiece. He took advantage of the extra space on the power play to rush from the corner to the net and fire off a back-hander that Jan Mursak deflected past Koskinen. That made it 3-0 and crushed any lingering hopes of a SKA revival with 11 minutes left to play. And the visitor’s evening got worse when experienced defenseman Dmitry Kalinin limped off the ice in the closing minutes after falling awkwardly following a collision with Evgeny Artyukin. The prospect of losing the services of the World Championship-winning defenseman for the rest of the series is a real one, and would be a huge blow to the Petersburg team’s hopes of recovering from this early setback.

SKA might also want to look again at its power play. The Petersburg team spurned three opportunities in the second period and two more in the third, struggling to turn its numerical advantage into dangerous moments for Galimov. And, as tempers frayed towards the end, the sight of Ilya Kovalchuk’s late hit on Radulov sparking another flash-point highlighted the frustrations of Vyacheslav Bykov’s team.