CSKA vs SKA. Moscow vs Petersburg. Two sporting regiments of the Russian Army going head-to-head. The most titled club in hockey history facing a big-spending but – thus far – trophy-less rival. A pair of superstar forwards ready to duke it out on the big stage. A Gagarin Cup and World Championship-winning coach up against an opponent cementing his reputation as perhaps the brightest prospect behind the benches in Russia right now. It’s all shaping up for a titanic showdown as the top two in the Western Conference go head-to-head for a place in the final.

In hockey, times change fast. When these teams met in the opening round of last season’s play-offs, SKA swept to a 4-0 victory and completed its anticipated serene passage into the Conference semis. CSKA, still in a seemingly endless period of transition, could offer little resistance. Twelve months later, though, it’s the Moscow men coming into the game buoyed by the title of champions of Russia after lifting the regular season crown, while SKA trailed in their wake. After waiting a quarter of a century for top honors and seeing teams like SKA emerge from the also-rans to stake a serious claim, the historic sorcerers of Russian hockey are ready to show the apprentices a thing or two once again. 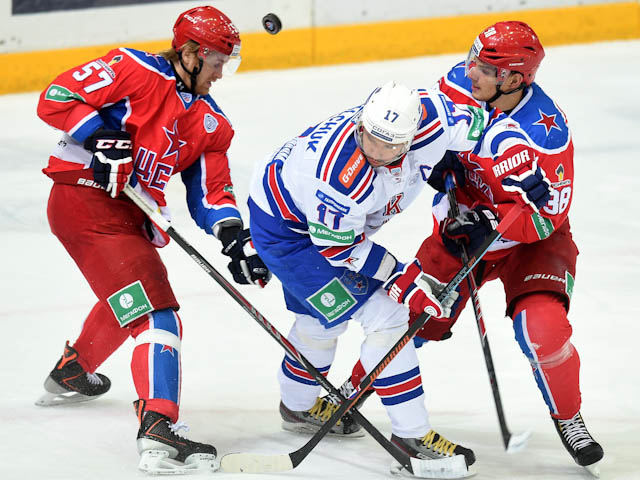 The transformation has been masterminded by Dmitry Kvartalnov in his first season with the Army Men. His team thrives on his unpredictable line-ups as he rotates his forward lines at will to keep opponents guessing. Certainly, he found all the answers to avoid Jokerit’s defend-and-counter tactics, outsmarting the experienced Erkka Westerlund to the tune of a 4-1 series success in the previous round. The former Sibir man has also got CSKA playing a genuine two-way game, with a defense that presses, stifles and leaves opposition forwards gasping for space around the net.

There’s little doubt that the key figure in all this is Alexander Radulov. His volatile, volcanic talents have been well-known for long enough, but Kvartalnov has got him playing at his absolute best. While Ilya Kovalchuk, SKA’s biggest name, has been one of a bunch of strong performers in Petersburg, Radulov and his collection of assists have been the architects behind CSKA’s success this season. Igor Grigorenko’s eight-goal haul against Jokerit might have shot the Finns out of the competition, but it was Radulov providing the bullets for his team-mate to fire. Whatever line-up Kvartalnov adopts here, expect the #47 to be the one to pull the strings on offense.

Can SKA stop him? Well, head coach Vyacheslav Bykov knows the player better than most. Radulov was part of his World Championship-winning teams in 2008 and 2009, and the pair won the Gagarin Cup with Salavat Yulaev in 2011. Radulov has been quick to play down any insider knowledge, pointing out that hockey moves on and he knows nothing of how Bykov is working with his team in Petersburg. However, others have pointed to rumors that SKA is looking at trying to sign the forward as evidence that a psychological battle to unsettle the player is already underway. Radulov, who racked up 143 PIM in the regular season, can be fragile under pressure – but his pre-game comments suggest he’s looking for a more phlegmatic response. “If they start trying to provoke me, I’ll just have to put up with it,” he told reporters at the club’s open training session on Tuesday. 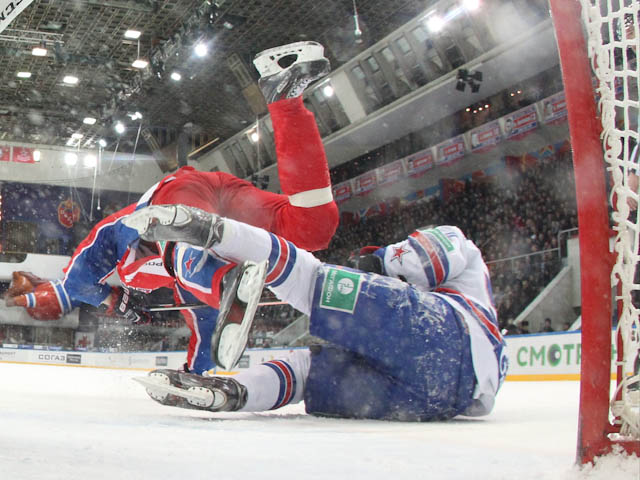 Bykov, meanwhile, might prefer to focus on the strengths of his own team. Defensively SKA impressed in the series with Dynamo, particularly in the two games in Moscow where it conceded just one goal. The power play is also clicking into gear, with 10 goals representing the best return in the Conference. And the scoring is spread around the team: Kovalchuk’s wholly respectable 4+4=8 from 10 games is bettered by 10 points from Vadim Shipachyov and nine from Patrick Thoresen, while Evgeny Dadonov and Tony Martensson can match his tally. With goals available from any line, SKA look set to pose CSKA’s defense its biggest test of the post-season to date.

However, the decisive factor in this series might be psychological: both teams have breezed through the opening rounds, losing just three games between them and never looking in serious danger in their respective series. Here, for the first time, at least one of these two is going to find itself behind in the race to four victories – and the reaction to adversity could well be the factor that tips the scales.