Goalkeeper Anders Nilsson has been in almost unbeatable form throughout this series and his third shut-out in four games was enough to take Ak Bars to the Conference final and a meeting with Sibir.

Incredibly, after conceding an overtime goal to Sergei Shirokov as Avangard took a 4-3 verdict in game one, the Swede has given up just one goal in 240 minutes of hockey as Ak Bars denied its opponent any chance of making progress. His phenomenal effort finished with another 21 saves tonight as his team wrapped up the series with two games to spare.

The game was decided in the second period with Ak Bars scoring twice in quick succession to open up a 2-0 lead that it was never going to relinquish. The opener came in the 35th minute after Igor Mirnov’s mighty check seized possession and his pass found Oscar Moller all alone in front of goal. A powerful shot didn’t manage to avoid Konstantin Barulin, but had sufficient force to get through the goalie.

Number two came a minute later and was a goal worthy of settling a game at the highest level. There seemed to be little danger when Alexander Burmistrov collected the puck out on the boards with Avangard’s defense well placed. But the forward, who relishes childhood memories of his home town club lifting the Russian Super League title against Avangard, wrote a new chapter in the history of Kazan hockey with a dazzling surge that saw him loop across the face-off circle, hold off two defenders and then juggle the puck past Barulin’s outstretched leg with some sizzling stick-handling. 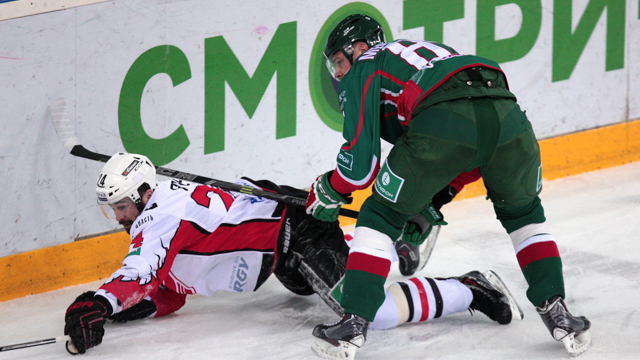 Avangard had no answer. If fiery head coach Raimo Summanen was enraged by the first goal, he seemed stunned by the second and the game moved to an inevitable conclusion. Ak Bars moves to its fourth Conference final.