Sibir overcame a wobble to clinch a 4-1 series triumph over Metallurg, dethroning the reigning Gagarin Cup holder and reaching the Conference Final for the first time in the club’s history.

With victory in sight in this series Sibir returned to Novosibirsk and welcomed goalie Alexander Salak and forward Alexei Kopeikin back to the roster for the biggest hockey game ever to be played in the Siberian capital. Another sell-out crowd gathered, desperately hoping that tonight would be the night their heroes confirmed its passage through the second round of the play-offs and exceeded last season’s achievement of reaching this stage.

But those fans were made to sweat on it before they could celebrate. The first period was scoreless, tense. Magnitka knew it had no margin for error and played a cautious game that kept chances to a minimum at either end. Then a penalty for Vyacheslav Belov gave the visitor the opportunity it was waiting for: Sergei Mozyakin scored on the power play and the champion was back in the fight.

Sibir needed a quick response and – helped by a penalty on Bogdan Potekhin – the home team was able to regain the momentum. Magnitka had barely returned to full strength when Sergei Shumakov tied it up just before the halfway point.

As the clock ticked on, the nerves jangled ever more loudly. The second period produced no more goals, another penalty on Belov midway through the third offered Metallurg an advantage it could not grasp. The game was already into the last two minutes when the moment finally arrived. Artyom Voroshilo’s pass from the corner was met by Oleg Gubin’s one-timer and Vasily Koshechkin was screened and unable to react as the net bulged. Joy … and then angst; the officials referred to the video, Stepan Sannikov’s stick was raised in front of goal, but how high? Not high enough to breach the rules, came the verdict. The goal stood. 2-1 Sibir.

Magnitka tried to conjure a final storm, but no sooner had Koshechkin reached the bench then an attack broke down and Igor Ozhiganov fired into the empty net from the face-off circle in his own end.. Finally the party could start as Sibir confirmed its place in the last four and set up a Conference final clash with Ak Bars. 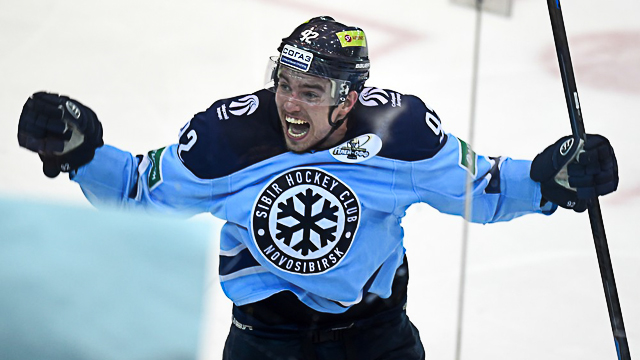